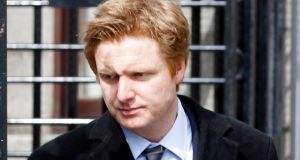 Blake O Donnell, Son of Solicitor Brian O’Donnell pictured at the High Court during the second week of a High Court action.

The High Court has continued orders preventing the sons of retired solicitor Brian O’Donnell and three companies dissipating any money they may get from the sale of a valuable property in London.

The bank, which is pursuing Brian and Mary Patricia O’Donell for repayment of a judgment of some €70million, obtained temporary orders last Friday preventing dissipation of any monies received from the sale by Blake and Bruce and three British Virgin Island (BVI) registered companies.

The bank said it feared residual sale proceeds could go to the companies as part of an alleged fraudulent scheme by the parents,  who are bankrupt and would not be entitled to deal in the assets, to put monies beyond the reach of the bank.

Blake O’Donnell has described the bank’s claims as “scurrilous”.

The bank wants the Columbus Courtyard sale to proceed, as do the O’Donnells and the court-appointed official administering the bankruptcy, the court heard on Wednesday.

The bank previously got undertakings from Blake and Bruce in 2012 not to deal in the BVI assets.

It says, when it learned last week the sale of Columbus Courtyard was imminent, it obtained ex parte (one side only represented) the temporary injunction preventing the BVI companies and Blake and Bruce dissipating any sale proceeds. It took separate proceedings in the BVI on the same day.

When the matter returned before Mr Justice John Hedigan on Wednesday, Blake O’Donnell complained, on behalf of himself and his brother, they had received only an order made by the BVI Supreme Court but none of the details of what the bank based its case on.

The order sought by the bank in the BVI was “a backdoor way” of getting a receiver appointed over the companies and was inappropriate, he said.

He did not understand why the 2012 undertakings given by his brother and himself were not enough, Mr O’Donnell added. The bank could simply have asked the brothers to agree to continue them.

The bank was trying to damage their reputations, he said. Despite bankrupting his parents, the bank was still pursuing them and pursuing him and his brother though “a derivative action”, he added.

The bank’s actions in seeking these latest orders may have triggered a default on borrowings on Columbus Courtyard in excess of StgÂ£100m, he also said.

Cian Ferriter SC, for the bank, said it had met the tests for securing an injunction pending full determination of the matter.

The judge said that what happened in the BVI was not really relevant to the bank’s application to continue the orders ontained here on Friday.  He believed the orders being sought were essentially the same as the undertakings previously given by the brothers and would grant them pending a full hearing.

He did not see how these proceedings could have any affect on the sale of the property, the judge added.