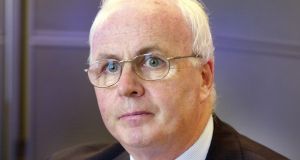 The National Asset Management Agency’s chairman Frank Daly has accused Wexford TD Mick Wallace of a “serious misrepresentation of the facts” in relation to allegations about the sale last year of its Northern Ireland loan book.

Mr Daly said it was “utterly disingenuous” of Mr Wallace to suggest that Nama had accepted less than it could have received for sale of the Northern Ireland loan portfolio, which was dubbed Project Eagle.

On Tuesday, Mr Wallace has claimed a representative of investment firm Cerberus Capital Management, which acquired the Northern Ireland loans, told him he was “going to get sorted” for making allegations in the Dáil about its purchase of a loan portfolio from Nama.

Mr Wallace has repeatedly raised concerns about the sale of the loan book of 800 properties in Northern Ireland, and the payment of €45 million in “fixers” fees to a number of individuals.

Mr Daly said the UK’s National Crime Agency was “not in any way concerned” with Nama’s role in the sale.

“The [NAMA]chief executive and I met the UK’s National Crime Agency some weeks ago and provided them with an overview of Nama and the chronology around the sale of Eagle. It is our clear understanding, based on that engagement, that their investigation is not in any way concerned with the Nama sale side of the transaction,” Mr Daly told the Oireachtas Public Accounts Committee today.

“Their focus appears to be very much on the purchase side and what may or may not have taken place in Northern Ireland.”

He said it was “totally unrealistic” to suggest Nama could have recovered the par value of the Northern Ireland loans within a reasonable timeframe if it retained ownership of the portfolio. The average value of the loans was only 27 per cent of par, he added.

Mr Daly also reiterated the agency’s long-standing position in respect of Project Eagle. He said the loan sales process was well-managed and competitive, that it was conducted in line with international best practice and independently overseen by Lazard, and that no external members of the Northern Ireland Advisory Committee had access to confidential information on the sale.

He said all bidders had equal access to information and no third parties - political or otherwise - had influence over the Nama board’s decision on Project Eagle, or were in a position to confer an unfair competitive advantage on any bidder.

Mr Daly also called on any individual who uses privilege to make claims of wrongdoing to pass on “accurate and reliable” information to Nama and/or the appropriate authorities for investigation.

“If those making such allegations genuinely believe that the information that has been passed on to them is indeed accurate and reliable, we would again urge that they pass it on to us or to the appropriate authorities so that it can be objectively investigated,” he said.