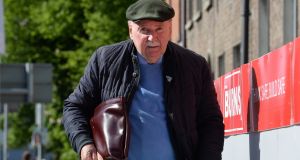 The complaints against former INBS chief executive Michael Fingleton include claims he enjoyed “excessive” control over the business of the society and made several loans of more than €1 million without consulting the board.

Michael Fingleton is unable, for health reasons, to properly defend a case against him over alleged breach of his obligations while he served as chief executive of Irish Nationwide Building Society, the High Court has been told.

Mr Fingleton (83) suffered a severe stroke in May 2018, which has left him physically and mentally incapacitated, Niall Clerkin, solicitor for Mr Fingleton, said. A series of cognitive assessments show a declining cognitive ability affecting his recall and ability to critically assess evidence, he said.

However, Irish Bank Resolution Corporation has urged the High Court not to halt its case against former Irish Nationwide boss over alleged negligent mismanagement of the society’s affairs.

IBRC does not dispute medical evidence that Mr Fingleton suffered significant physical and cognitive impairment following a stroke in 2018 but it maintains that his ill-health, while “an impediment”, is not a basis to stop the case, Lyndon MacCann SC argued.

Initiated in 2012, the case includes claims Mr Fingleton “flouted” INBS rules relating to the making of loans, he said. Documentary, objective, witness and expert evidence will be crucial in that regard rather than subjective evidence of Mr Fingleton, he argued.

While the Central Bank in late 2019 permanently stayed an inquiry into Mr Fingleton’s conduct of the affairs of INBS on grounds of his ill-health, IBRC’s case is different because it involves civil proceedings, counsel argued.

It is not impermissible to sue the elderly and unwell, even the dead, and it must be contrary to public policy to “immunise” cognitively impaired defendants from suit.

Mr Justice Tony Hunt on Tuesday began hearing Mr Fingleton’s application to dismiss or permanently stay the action brought by the special liquidators of IBRC, which took over INBS after it collapsed.

In its action, IBRC claims the building society’s €6 billion losses from 2008-10 arose from development loans made when Mr Fingleton was CEO.

Had the true picture of INBS’ affairs been disclosed, it claims Mr Fingleton would have been summarily dismissed for breach of duty by 2007 at the latest and not paid expenses allegedly inappropriately incurred, as well as some €1.2 million in performance bonuses for 2008 and 2009 when he left.

Mr Clerkin said Mr Fingleton’s ill health, plus the breadth of the case, were “exceptional” reasons to halt the case. The complaints against Mr Fingleton include claims he enjoyed “excessive” control over the business of the building society and made several loans of more than €1 million without consulting the board, Mr Clerkin said. 18 different loans to a variety of different borrowers were referenced.

That claim was “hotly disputed” by Mr Fingleton who says the board was “fully aware” of the loans at issue.

If the case proceeds, Mr Clerkin said it could result in a judicial decision Mr Fingleton was a significant figure in the economic collapse of 2008. While accepting “a lot of people believe that” and there “is a case to be heard here”, the case is “so vast” and Mr Fingleton’s impairments “so severe” there is no reality of his personal and constitutional rights, including to due process, being vindicated and the case must be stopped, Mr Clerkin argued.

He disputed IBRC’s claims the case could be decided on objective evidence without having Mr Fingleton’s subjective testimony. Mr Fingleton believed not all relevant documents had been examined and wanted to explain what others, including Central Bank, auditors and economic commentators, had said at the time, he said.

When Mr Clerkin said there was “not a cloud on the economic horizon” in 2006 and the financial world was one of “self-congratulation”, Mr Justice Hunt said, while that was “certainly the comfortable majority view”, it was “not universal”.

In arguments for IBRC, Mr MacCann noted claims by Mr Fingleton, given banking standards and operations up to the 2008 financial crash, Mr Fingleton genuinely believed he was doing the right thing. That may go to bona fides but it was “an absurdity” to contend it was a defence to a claim of negligence.

It will be “a matter of fact”, not subjective evidence by Mr Fingleton, whether certain loans between 2004 and 2007 were authorised by him prior to, or without, their being approved by the society’s credit committee and its board, he said. IBRC claimed those transactions were representative of his alleged mismanagement of the society’s affairs.

Other issues, including whether Mr Fingleton’s conduct accorded with that of a reasonable CEO of a financial institution and whether he directed the society’s commercial lending department to make certain loans can be addressed via objective evidence, he said.

The “enormity” of the case is not a basis for dismissing it, he argued. The statement of claim was delivered in 2013, Mr Fingleton had “ample” time since then to prepare his defence and had had no cognitive impairment over several of those years.