Joan Burton: Irish economy was like ‘athlete on steroids’ 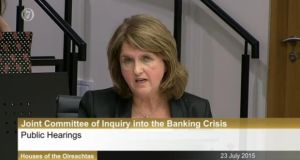 Tánaiste Joan Burton has said the Irish economy from 2002 - 2007 was like an athlete on steroids. (Live blog here).

In a submission to the Oireachtas banking inquiry, Ms Burton said the crisis was homegrown made by bad decisions.

She said: “What had been a healthy economy with sound public finances, strong export led growth, full employment and a healthy balance of payments position was now an uncompetitive, high price economy driven by a credit fuelled housing bubble that would eventually crash and burn.

“This transformation didn’t happen by some accident. It was not caused by some external force that we couldn’t resist but was entirely home-made, caused by bad government policies.”

Minister Burton said she wanted to put to bed the claim by Fianna Fáil that everyone played a role in the crash.

She told the committee: “I want to nail the lie of the last Fianna Fáil led government that we were all responsible for the national bailout crisis. This is absolutely untrue.

“The Irish people were victims of the crisis and continue to pay a heavy price. Those responsible were the Fianna Fáil led government, the boards of the banks, the Central Bank and the Financial Regulator.”

Ms Burton said: “To view the crisis as a banking crisis which led to an economic collapse is to see events in the wrong order.

“The correct order is the following: a series of catastrophic economic policy decisions by the Fianna Fáil/ Progressive Democrat government created a huge distortion in the structure of the Irish economy, destroyed our competitiveness and, in the process, inflated the biggest property bubble in any advanced country in modern times.

“The bursting of this bubble and the associated collapse of the domestic economy led to the banking crisis. To put it bluntly, I warned time and again against the property -based tax breaks fuelling this bubble.”

Ms Burton said the decision by Fianna Fáil and the Green government to guarantee the banks was “disastrous”.

She said: “This was the most damaging and expensive decision in terms of the costs of dealing the crisis.”

Also speaking before the inquiry, former Labour leader Pat Rabbitte said the “theatre” of the Dáil chamber is not effective in holding the Government to account.

The former Labour leader said the bank guarantee “sprung on us shock and awe”.

“It was the most extraordinary story I have ever woke up to. In that reality, we didn’t have a refined alternative. We had to react to the proposals being brought forward. “

Mr Rabbitte said whatever or whoever was responsible for the banking crisis it was not the opposition.

“That is the natural impulse of democratic politics. At the end of the day, however, there is no escaping the fact that government must govern and the opposition must attempt to hold government to account.

“The opposition proposes and government disposes. The efficacy of the oversight of the banking sector in the critical years has been found wanting.

“In the narrow area of effective scrutiny of the banking sector, if the structures had existed and if the opposition had known the pertinent questions to ask, the government wouldn’t have been able to answer them because the government didn’t know there was a crisis until it was too late.

“Hopefully your Inquiry will be successful in throwing more light on why this should have been the case.”

He said the Oireachtas was and is ill-equipped to scrutinise the banking sector and said few elected members could do that and carry out their function as a TD.

The inquiry hearing became quite heated when Fianna Fáil Senator Marc MacSharry asked if Mr Rabbitte or Ms Burton had availed of hospitality from developers.

Mr Rabbitte said he had a pint with a builder’s son but he didn’t know if he was any good as a developer.

“As you know, talent sometimes skips a generation,” he said.

Mr Rabbitte, who was leader from 2002-2007, said the Finance Committee needed to be better resourced to allow members can question the work of bodies.

He said this was not to second guess the role of the Financial Regulator or “attempt to do his job” but to satisfy themselves there is proper scrutiny.

Mr Rabbitte said he never linked the rise in property prices to the crisis in our banks.

He said there were no credible economic reports to suggest the banks were at risk.

He said it was not the job of a TD to regulate the banks but it was the role of the government to ensure the regulation was sufficient.