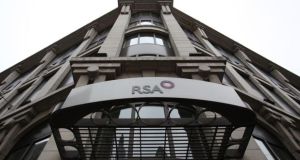 Despite this shares still tumbled more than 5 per cent in London.

“RSA’s results are on balance disappointing,” said Thomas Seidl, an analyst at Sanford C Bernstein. “The key driver for that is the outlook.”

He said the company’s plans for additional cost cuts don’t resolve uncertainty over its capital.

Shares fell 5.3 per cent in morning trading, the biggest selloff since June.

The insurer also announced that chief financial officer Richard Houghton is stepping down in May, the latest of senior executives to depart since Mr Hester joined a year ago.

“It’s the first year of the big turnaround that we had needed to make and we can say quite clearly that the ship is turning,” said Mr Hester. “The cleanup of past weaknesses has been extensive. There are headwinds, but we feel RSA is making much better progress.”

In the past year, Mr Hester has carried out a $1.3 billion share sale and reversed a decade of acquisitions to rebuild capital after three profit warnings and an Irish accounting scandal cost former chief exectutive Simon Lee his job. Job Cuts

The former chief executive of Royal Bank of Scotland said the new cost targets would inevitably lead to more job losses across the group, including in Ireland, which could “run into the thousands.”

That follows a 6 per cent headcount reduction in 2014. More asset disposals are planned in 2015, including its Middle East business after the insurer raised more than £800 million from sales across Europe and Asia.

Its Irish unit cost RSA another £100 million in 2014, taking its total bill since the accounting irregularities were first reported to about £300 million, Mr Hester said.

He sees further losses in 2015 before RSA Ireland returns to profitability in 2016.

The insurer is still awaiting the results of a probe by Ireland’s central bank that may result in a fine.

It’s also fighting a constructive dismissal case filed by the former head of its Irish unit, Philip Smith, who resigned last year saying he was made the “fall guy”.