Loan portfolio is linked to the former Anglo Irish Bank 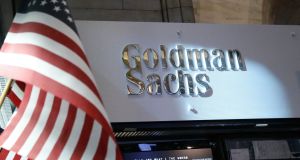 Goldman Sachs is the latest global investor to be linked with an Irish loan portfolio. (Photograph: Brendan McDermid/Reuters)

A venture between Goldman Sachs and CarVal Investors is understood to be poised to purchase about €1 billion of real estate loans linked to the former Anglo Irish Bank.

The venture is the preferred bidder for the loans, which are being sold by the special liquidators of Irish Bank Resolution Corp. at a discount it’s understood.

Some of the world’s biggest investors are flocking to Ireland, buying unwanted real estate assets as the country recovers from western Europe’s biggest housing crash. This week, Royal Bank of Scotland Group Plc agreed to sell Irish real estate loans with a face value of £4.8 billion to Cerberus, while Blackstone Group purchased office buildings in south Dublin from a group of investors.

Spokesmen for Goldman Sachs, CarVal and IBRC declined to comment.