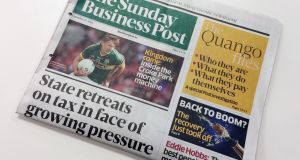 The accounts show that KCII Ltd acquired a majority stake in Brindisi which owns 92 per cent of Post Publications, which publishes the Sunday Business Post newspaper.

A company connected with Irish financial advisory firm Key Capital moved into the black last year with a profit of €2.5 million.

This compared with a loss of €712,664 in the previous year, according to accounts just filed by KCII Ltd.

The company’s turnover rose to €29 million last year from €21.4 million a year earlier.

The company paid €181,000 in corporation tax, while no dividend was distributed to shareholders. It closed the year with equity valued at €20.3 million, up from €17.7 million a year earlier.

The directors report states they were “pleased with the performance of the business last year”.

The accounts show the company acquired a majority stake last year in Brindisi Ltd, which owns 92 per cent of Post Publications Ltd, the entity that publishes the Sunday Business Post newspaper. The company also granted shareholder loans of just under €1 million to Brindisi.

And it acquired Adenium Ltd, which operates as Webprint and prints newspapers.

In addition, KCII has a shareholding in Tyrone Energy, a biomass business in Northern Ireland.

Tyrone Energy was the biggest profit contributor at €2.6 million, followed by Key Capital Private Ltd at €322,660.

The biggest drag on its financials was Key Capital Investment Management Ltd, which made a loss of €226,560 in 2015.

The average number of staff at the company last year was 135, with its payroll costs amounting to €8.2 million. Directors’ emoluments amounted to €2.1 million.

The lockdown was overkill but justifiable in an information vacuum