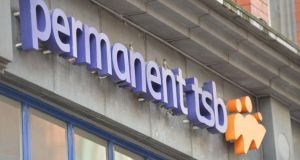 Permanent TSB’s annual meeting will be held on April 8th with the bank expected to outline its plan to shareholders. Photograph: Alan Betson / The Irish Times

Permanent TSB has received approval for its capital-raising plan from the governing council of the European Central Bank.

The Irish Times has learned that the ECB gave the green light last week to PTSB’s plan to raise €855 million to fill a capital hole identified last October in pan-European bank stress tests.

This process will effectively start on Thursday when PTSB holds an analyst- and investor- day webcast.

Small investors The company’s annual meeting will be held on April 8th with the bank expected to outline its plan to shareholders, particularly the thousands of small investors who own 0.8 per cent of its shares between them having had their holdings almost wiped out followed the bank’s bailout by the State in 2011.

This investment will effectively involve the State’s 99.2 per cent shareholding in PTSB being diluted. A stake of up to 45 per cent in the bank is likely to be taken by the investors in return for their funding.

A large chunk of the money raised from private investors is expected to be used to pay for the State’s €400 million in convertible contingent capital notes (cocos).

The stress test results were based on PTSB’s balance sheet for the year ended December 2013. At the time of the results, PTSB said various actions by it since then had reduced the amount it needed to raise to €125 million.

Raising a higher sum gives the bank the opportunity to deal with the State’s cocos and make a first repayment on its bailout funds.

It could be May or June before PTSB finalises its fundraising from private investors, after which it would have to present its plan to the Minister for Finance Michael Noonan for approval.

It would then have to submit its proposal to the ECB, which has given the bank until July to fill the capital hole identified in the stress tests.