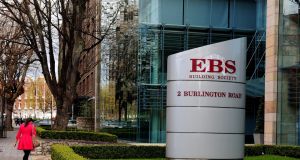 BMFS claimed the agency agreement was terminated over its refusal to engage in the mis-selling of financial products to customers. EBS denied the claims. Photograph: Bloomberg

The Court of Appeal (CoA) has rejected an appeal by the Educational Building Society (EBS) against an injunction preventing it terminating an agency agreement for three of its branches.

The injunction applies pending the outcome of the full hearing of the dispute.

Betty Martin Financial Services (BMFS) is a tied agent of EBS Athlone. In the 1990s, the business became the first EBS agency to be operated by a woman, the late Betty Martin.

She also took over the agency in Longford some time after that. Her son Declan Martin later became involved and the company also took over EBS Lucan in Dublin. Mr Martin’s sister Sheila Martin got involved in the business in 2017.

In the BMFS proceedings against EBS DAC, Mr Martin claimed that, from 2010 onwards, he began to have issues with EBS regional manager Tim Gleeson who had managerial responsibility for all three branches.

BMFS claimed the agency agreement was terminated over its refusal to engage in the mis-selling of financial products to customers.

EBS denied the claims and had opposed the injunction application.

The court said, while the EBS denial of the mis-selling claims was “robust”, he was driven to the conclusion the allegations are a serious issue that will feature in the full hearing of the dispute.

The High Court judge was also satisfied BMFS had made out a serious issue to be tried, damages would not be an adequate remedy, and the balance of justice favoured the granting of the injunction.

EBS appealed the injunction decision and the CoA last month dismissed the appeal.

In its written judgment published this week, the CoA said the High Court judge was correct.

Mr Justice Maurice Collins, on behalf of the three-judge CoA, said he was very conscious the continuing of the injunction meant the continuation of an “involuntary relationship” between EBS and BMFS for potentially a significant further period of time.

While the main proceedings over the termination are being managed by the fast track Commercial Court and they should be heard with “reasonable dispatch”, the EBS can apply to discharge the injunction if it considers BMFS is guilty of undue delay, he said.

Where a party has obtained an injunction pending trial, they have a particular duty to take all reasonable steps to ensure a timely trial, he said.

Equally, if there was any material change in circumstance which appears to have an impact on the continuing operation of the injunction, it will be open to either party to bring whatever application appears appropriate, he said.