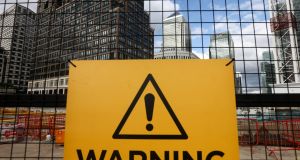 A warning sign hangs from a fence at a construction site in the Canary Wharf financial business district in London. Quitting the EU could cost as many as 100,000 jobs in the sector by 2020, according to industry group TheCityUK. (Photograph: Simon Dawson/Bloomberg)

The City of London Corporation’s Head of Policy and Resources Mark Boleat said Ireland is an “attractive” option for major financial institutions reconsidering their London staff in the wake of Brexit.

Boleat said the biggest threat to the City is the possible loss of its valuable “passporting” rights,, which currently give City-regulated banks of any nationality the right to conduct business across European Union.

When the UK leaves the EU, depending on the terms of the divorce, London could lose those rights, an outcome London’s Mayor Sadiq Khan said today would be a “disaster.” Treasury-backed estimates put their operational value at £10 billion - the equivalent of 100,000 well paid jobs.

Boleat said Ireland will be competing with Paris, Frankfurt and Amsterdam for the business, but added that financial institutions are most likely to move jobs to areas they already have a footprint. HSBC, for instance, has said it will move 1,000 jobs to its Paris office after Brexit, but others, including Citigroup, had been bolstering their Irish operations even before last week’s referendum.

“Ireland is as close to the UK as it is possible to be - it speaks English and plays rugby - but it is not at the centre of the continent,” said Boleat. You also have Paris, although there are always strikes there, Frankfurt and Amsterdam, which already has a nice niche.” Euro currency clearing, which the UK recently won an ECJ victory to retain against Brussels’ wishes, is the banking business the City of London believes to be most immediately at risk once it pushes the button on Brexit.