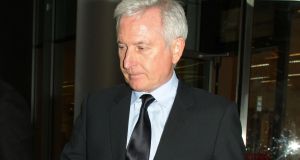 Developer Paddy McKillen has lost a High Court challenge to a process in which a Government-appointed assessor has been asked to come up with a valuation for shares in the nationalised former Anglo Irish Bank.

Mr McKillen, who was a substantial shareholder in Anglo, brought judicial review proceedings last year over the short timescale the developer was given to respond to the role of the assessor in determining compensation for Anglo shareholders.

Under the Anglo Irish Bank Corporation Act in 2009, the Government provided for the extinguishment of certain rights in the bank, removal of certain people from office and payment of compensation for shareholders. At the time of nationalisation, Anglo shares had a “hope value” of 22 cent.

Almost 10 years later, in November 2018, assessor David Tynan of PwC was appointed to decide on that compensation.

As part of his challenge, initiated last June, Mr McKillen was granted a stay on Mr Tynan publishing his final report for the Minister for Finance on the valuation pending determination or the legal proceedings.

Among Mr McKillen’s arguments were that there was a degree of “vagueness” about how Mr Tynan’s assessment was being carried out and that he had not been given enough time to make submissions to Mr Tynan.

The application was opposed by Mr Tynan.

Mr McKillen had not satisfied him either of these two men “qualify as experts” in this field. Even if they did, their evidence was of “no real value”, he added.

It was on the basis of their evidence that Mr McKillen made out that he needed certain information to make a meaningful submission to Mr Tynan, the judge said.

As their evidence was not capable of supporting this, Mr McKillen had not discharged the burden on him of establishing it was information which was required by him to make a meaningful submission to the assessor, the judge said.

Mr McKillen had also not succeeded in making out a case of objective bias on the part of Mr Tynan, he ruled.