2018 ‘off to a good start’ says chief executive Jamie Dimon 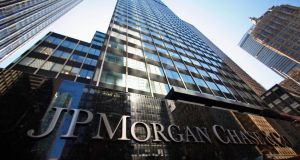 JPMorgan Chase has got the US banks’ first-quarter earnings season off to a bright start, posting a 35 per cent rise in net income to a record $8.7 billion (€7.06 billion).

The biggest US bank by assets played its traditional role of front-running the rest on Friday morning, revealing solid increases in revenue across its main divisions of consumer and community banking, investment banking, commercial banking and asset and wealth management.

The bank noted that its first-quarter results included $505 million of pretax mark-to-market gains connected to the adoption of a new way of accounting for equity investments previously held at cost. The benefit came to 11 cents per share.

The record quarterly net income meant that the bank made about $100 million in profit for shareholders every single day.

“2018 is off to a good start with our businesses performing well across the board, driving strong top-line growth and building on the momentum from last year,” said Jamie Dimon, the bank’s chairman and chief executive. He described loan growth as “flat”, however, noting an “intensely competitive” environment, despite “high … client sentiment”.

Other senior executives at the bank have been making bullish remarks recently, noting a pick-up in trading activity, healthy volumes in dealmaking and capital-raising, and still-low delinquencies across most parts of the consumer and commercial banks. A lower tax rate, higher interest rates and lighter regulation are also expected to boost profits this year.

In February, at JPMorgan’s annual investor day, the bank moved its medium-term target for return on tangible common equity to roughly 17 per cent, from 15 per cent.

During the call with Mr Dimon and chief financial officer Marianne Lake later on Friday morning, analysts will be keen to hear if a rebound in trading volumes - up 15 per cent to $7.5 billion - can be sustained.

As Saul Martinez, analyst at UBS, notes, the first quarter tends to be the “high water-mark” for the year, in terms of activity. “Can we sustain better trading results? Or will it lead to institutional investors heading to the sidelines, in terms of risk-taking activity?”

Analysts will also probe the outlook for loans, which were up 2 per cent in the consumer business and 7 per cent in the wholesale business. – Copyright The Financial Times Limited 2018