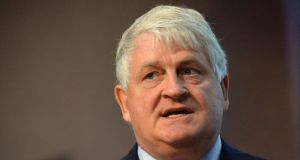 Denis O’Brien is seeking an injunction preventing an RTÉ report based on a 2013 letter he wrote to IBRC liquidator Kieran Wallace.

Denis O’Brien is a “media baron with the power that wealth can buy” and should not attempt to portray himself as a “rich victim” of media scrutiny, the High Court has heard.

David Holland SC, for RTÉ, which is defending an injunction application by Mr O’Brien to prevent the broadcast of a story about the terms of his loans with State-owned bank IBRC, said yesterday that Mr O’Brien was “different” to other citizens in terms of his right to privacy.

“He has a right to privacy . . . but not the same right [as other citizens],” said Mr Holland. “He has the power that wealth can buy and he is entitled to use it . . . [but] he can never be a private person.”

Mr Holland said that the arguments of Mr O’Brien’s legal team that, regardless of his wealth, he had the same right of privacy as anyone else, portrayed the “rich as victim . . . a highly naive approach”.

“Mr O’Brien cannot complain if the media, to monitor powerful people, do their job,” said Mr Holland. “He personally owns almost 30 per cent of Independent News and Media. He owns or controls 27 radio stations. He is a media baron.”

Mr Holland said he was not suggesting Mr O’Brien ever “misused his barony” by interfering with the editorial output of his media organisations.

Mr O’Brien is seeking an injunction preventing an RTÉ report based on a 2013 letter he wrote to IBRC liquidator Kieran Wallace, which included a “request” to the bank regarding the “speed of repayments”.

Mr O’Brien alleges the story would be a breach of his privacy and damage his standing with his other banks.

Mr Holland argued that it was too late for Mr O’Brien to prevent most of the details getting out, and RTÉ was only seeking to “put flesh on the bones” of details already in the public domain. He said it was already known that Mr O’Brien was a “major debtor” of the bank.

A debate then ensued between Mr Holland, Mr O’Brien’s counsel Michael Cush, and Mr Justice Donald Binchy over attempts by Mr Holland to characterise the extent of the billionaire’s indebtedness to IBRC. Those details are subject to a reporting restriction.

“Those genies are out of the bottle,” said Mr Holland. He said RTÉ’s right to freedom of expression trumped Mr O’Brien’s right to “confidence” between him and his bank. Earlier, Michael Collins, senior counsel for the bank, which is also seeking the injunction, said a free press had to balance privacy rights with the public’s right to know.

Mr Cush told the court Mr O’Brien knew he would draw attention on to the story by seeking an injunction, but “if he lets this go, what’s next? It’s a matter of principle,” he said.

“Some people will always believe he is trying to hide something. This is a dilemma he faces. So be it,” said Mr Cush.

He also referred to testimony by banking expert Marcus Trench, who said the release of confidential details about Mr O’Brien’s banking affairs could damage his standing with other banks.

The case is expected to conclude this afternoon.