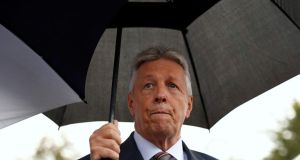 Cerberus say it had contact with Northern Ireland First Minister Peter Robinson (above) and former minister of finance Simon Hamilton before the acquisition of Nama’s North portfolio. Photograph: Cathal McNaughton/Reuters

Cerberus, the New York investment firm that bought Nama’s portfolio in the North for £1.2 billion (€1.6bn), has said for the first time that it held “substantive discussions prior to the acquisition” with “stakeholders” in the North, including senior politicians.

The US firm told a Stormont committee investigating the sale of Nama’s former assets that “as part of its due diligence into the Northern Ireland economy and ongoing liaison with the stakeholders in the jurisdiction” it has had “contact” with the former first minister, Peter Robinson and the former minister of finance, Simon Hamilton. (* article amended)

Deputy first minister Martin McGuinness has said the only contact he had with Cerberus was on September 24th, 2014, which was after the sale of the Nama loans portfolio. Cerberus has confirmed this.

The US group has also confirmed that it met Mr Robinson and Mr Hamilton before the acquisition.

Cerberus on Wednesday also informed the Northern Ireland Assembly’s Committee for Finance and Personnel that it had “contact” with the former minister of enterprise, trade and investment, Arlene Foster and Nigel Dodds, the deputy leader of the Democratic Unionist Party.

The US firm had been scheduled to appear next week before the committee, which is conducting an inquiry into the sale of Nama’s property loan portfolio, or Project Eagle as it was known in the North.

But Liam Strong, chief executive, Cerberus European Capital Advisors wrote to the committee to say that following legal advice the US firm would no longer be able to attend.

Instead Cerberus has made a written submission.

Cerberus details in its submission that its “interactions” with the “stakeholders in the jurisdiction” - which included the named politicians - involved “senior Cerberus representatives including in some instances the chairman of Cerberus Global Investments, former vice president of the United States Dan Quayle”.

These were primarily sparked by allegations made by Independent TD Mick Wallace in the Dáil in July when he exposed the existence of a bank account containing £7 million which he claimed was linked to the Nama transaction in the North.

Mr Wallace claimed the money had been lodged by Ian Coulter, former managing director of Belfast law firm Tughans, which had been retained by one of Cerberus’s advisers: Brown Rudnick, a US-based international law firm.

Mr Wallace alleged a Northern politician or party may have been one of the intended beneficiaries of the £7 million.

Mr Coulter has since said “no politician, nor any relative of any politician in Northern Ireland, was ever to receive any monies in any way as part of this deal. This was never discussed, assumed nor expected.”

The £7 million is now in a bank account controlled by the Law Society of Northern Ireland.

As part of its inquiry into the sale of Nama’s property loan portfolio in the North, the Northern Ireland Assembly’s Committee for Finance and Personnel has asked a wide range of key players including the Law Society, local business people, Nama, Cerberus and senior politicians to provide evidence.

Representatives from Nama have consistently refused to appear.

In its written submission, Cerberus said that it was “deeply concerned by the allegations and inferences that have been made before this committee, in the Irish parliament and the media, related to the Project Eagle sales process”.

Cerberus reinforces, in its submission, it is “satisfied no improper or illegal payments have been made by Cerberus or any of its affiliates in connection with the Project Eagle portfolio and Cerberus did not direct or authorise anyone to make such payments on its behalf.”

*This article was amended on Thursday, September 17th