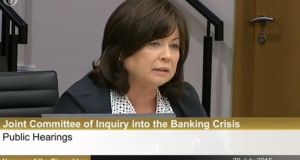 Former tanáiste Mary Harney said the government should have asked harder questions and dug deeper than it did in the lead up to the banking crash. Screengrab: Oireachtas

Former tánaiste Mary Harney has admitted the government should have asked harder questions and dug deeper than it did in the lead up to the crash.

Ms Harney, who was a former leader of the Progressive Democrats, said there were many mistakes made by the then coalition in the run up to the crisis in 2008.

She said the government had undue confidence in the financial regulatory authorities and “stood too far at arm’s length when there were serious signals to be read in the economy”.

The former tánaiste said the government, among other things, should have foreseen the explosion of cheap credit.

She said: “We allowed public spending to grow too quickly on the back of unprecedented tax growth, and we underestimated the multiplier effect of excessive and unsustainable construction activity and property transactions on the economy as a whole and the public finances in particular.

“That, with some notable exceptions, the general commentary through the years up to the crisis was benign perhaps helps to explain some of these errors.

“It does nothing though to ease my regret that we as government had a heavy responsibility for not digging deeper, asking harder questions and taking (unpopular) decisions before we did from 2008 onwards.”

Ms Harney said allowing Anglo Irish Bank to fail in September 2008 would have created billions of euro in losses.

She discussed her role on the night of September 29th, 2008, when the blanket bank guarantee was agreed by the government.

She said she received a phone call from the then minister for finance Brian Lenihan at 9pm that night asking her to be on standby.

Ms Harney said she told Mr Lenihan her and her husband own bank shares and could not take part in any decision made.

Ms Harney said Mr Lenihan had told her he was “very worried” about whether the banks were telling him the full picture.

However, she added: “With hindsight, it seems to me that the guarantee was the correct thing to do at the time, especially given the knowledge we had then.

“I note that even after seven years there are still very conflicting opinions about this, and I do not claim to offer any particular expertise on the issue beyond what the committee has already heard. One thing I am sure of is that whatever decision was reached that night, there would have been severe criticism afterwards.

“The ultimate judgement was not to nationalise Anglo Irish Bank and I have no expert knowledge as to whether nationalisation at that point (or shortly thereafter) could have resulted in a better outcome for the taxpayer. I remain to be convinced on the basis of all that I have heard or read that it would have made much if any positive difference.

“Indeed if we had decided to let Anglo fail, while supporting the other, bigger, banks, I suspect there still would have been a parliamentary inquiry, huge controversy and litigation – depositors, including pension funds, would have incurred great losses amounting, presumably, to many billions of euros.”

Ms Harney said she did not want to make a scapegoat of anyone and insisted collectively everyone failed.

She said the first responsibility lies with the banks, then the regulatory authorities.

Under questioning from Fine Gael TD John Paul Phelan, Ms Harney said: “If you’re asking me are we going to have another crisis, I can’t put my hand on my heart and say no.

“But everything possible has been done to prevent it.”

You can read her full statement here.