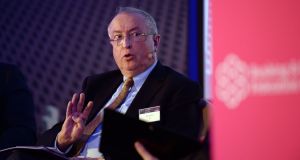 Pay restrictions for bailed-out banks have turned AIB into a “training ground” for bankers who then move to higher-paid roles with competitors, the lender’s chairman Richard Pym told an audience in Dublin on Thursday.

“Ireland is, I guess, the only country in the world that raises barriers for domestic banks” while encouraging foreign competitors, Mr Pym said at the Banking & Payments Federation Ireland (BPFI) annual conference.

“Sometimes it feels in AIB that we’re the training ground for the rest of the competition, as it were,” he said.

AIB’s chief executive, Bernard Byrne, said in an interview with The Irish Times Inside Business podcast, aired on Wednesday, that the group had lost a “mid-teens” percentage of almost 200 most senior managers since it returned to the main Dublin and London stock markets in June last year.

He said the turnover of senior staff is higher than normal and is “accelerating” as overseas financial firms prepare to move operations to Dublin as a result of Brexit.

The Minister for Finance Paschal Donohoe last month hired Korn Ferry, one of the world’s largest headhunting firms, to assess remuneration across bailed-out lenders, which is expected to recommend a return of bonuses.

However, industry sources say the removal of the prohibitive tax charge would be very difficult to push through politically, especially with a minority Government in place.

Mr Pym said he’s “fully aware of the damage and harm and hatred that’s felt towards the banks, but you have to move on at some stage”.

The AIB chairman said that Ireland “might be the slowest to join that consolidation” that’s expected across European banks over the medium term as a result of banking union, but that tie-ups are “inevitable”.

“Given the history of Ireland, the stress in Ireland is always worse than in other jurisdictions, which is a bit counterintuitive because Ireland has gone through more changes in the system and, therefore, the likelihood of the same stress is much lower,” Mr Byrne said.

Still, the AIB said that the total capital starting positions for Irish banks are “pretty good in general” and AIB will end up in “a reasonable position”. AIB and Bank of Ireland were among the worst performers in the last set of Europe-wide stress tests in 2016.