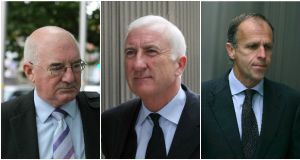 Willie McAteer, Denis Casey and John Bowe were all handed jail terms on Friday for their roles in a €7 billion fraud. Photograph: Composite/Brenda Fitzsimons/Collins Courts

Three former bankers have been handed prison sentences for their roles in a €7 billion fraud.

Former Anglo Irish Bank executive Willie McAteer has been sentenced to three and a half years in jail while his Anglo colleague John Bowe was given a two year term.

Denis Casey, the former group chief executive of Irish Life and Permanent, has been jailed for two years and nine months.

The three men did not react when the sentences were handed down. They conferred briefly with their lawyers before being led out of court through a side-door.

McAteer briefly glanced at judge Martin Nolan when he confirmed all three men would receive prison sentences, but otherwise the three former bankers stared at the floor throughout the hearing.

The judge said he imposed a two year sentence on Bowe, telling him the lower sentence was because he was “a lesser functionary” and not a board member.

The three men have 28 days to lodge a notice of intention to appeal the sentences.

Last June, a jury at Dublin Circuit Criminal Court convicted Bowe (52) and McAteer (65), and the former Group Chief Executive of Irish Life and Permanent plc (ILP), Casey (56) of conspiring to make Anglo’s books look €7.2 billion healthier than they actually were.

The three men were involved in setting up a circular scheme of billion euro transactions where Anglo moved money to ILP and ILP sent the money back, via their assurance firm Irish Life Assurance, to Anglo.

Handing down the sentences after the longest running criminal trial in Irish history, judge Martin Nolan said the transactions at the heart of the case were “dishonest, deceitful and corrupt”, adding: “There is no other way of describing it.”

He said they were “sham transactions”.

“All they did was to create the impression that Anglo Irish Bank had€7.2 billion more in corporate deposits than it had.”

People were entitled to rely on the public accounts published by companies, the judge said.

While he was “very much aware of the involvement and non-involvement of State authorities” and of the broader background to the case, the judge said he regarded the offences as “very, very serious.”

Members of the public were entitled to expect “integrity and honesty” from big firms. “Honesty and integrity was sorely lacking in these transactions,” he added.

Judge Nolan described McAteer as a man of “huge experience” who was a board member of Anglo and close to the leadership of the institution.

His actions in relation to the transactions at the centre of the case were “grossly reprehensible” and “a huge error of judgment”.

‘Saving the bank isn’t everything’

Judge Nolan said Bowe was the “de facto treasurer” of the Anglo at the relevant time. “He was the chief man in the treasury room,” the judge said.

“He should have known what he was doing.”

In law, the judge said, following orders was not a defence. “If Mr Bowe had told them not to do it, he would have fulfilled his function.” He did not do that, the judge added.

The judge described Casey’s decision to involve himself “to help a fellow Irish institution” as “a grave error of judgment”, adding: “He was a man who should have known better.”

In his remarks, which took just over 20 minutes to deliver before a packed but silent courtroom number nine, Judge Nolan also said it “beggared belief” that the accounting firm Ernst and Young had signed off on Anglo’s interim accounts.

“They should have known what was happening if they did their job properly,” he said. “It seems incomprehensible how these accounts were signed.”

He said he did not know if it was blindness or wilful blindness.

Judge Nolan said the transactions carried out by the three former bankers did not cause the collapse of the Irish banking industry. Nor did the banks lose money as a result of the transactions.

“But what they did nonetheless was extremely wrong.”

In view of the seriousness of the crimes, the judge said, he had to impose prison sentences on all three men.

He said he did this while taking into account all that they and their families had suffered, and the adverse effect their convictions would have on their records and their futures.

He said he had taken into account that the three men did not profit from the transactions. “All three men acted in what they thought would be in the interests of their companies,” he said.

The judge acknowledged the three men had lost their jobs and had been subjected to “public odium and ridicule”, while their lengthy trial had been “a very stressful experience”.

On the background to the case, the judge recalled 2008 was “a chaotic year in the financial world”, that there was “dysfunction” in financial markets and that people in the industry were under stress.

“These crimes came out of that background,” he said.

The judge said his “starting point” in sentencing in the case was eight years.

Bowe from Glasnevin, Dublin, McAteer of Greenrath, Tipperary Town, Co Tipperary and Casey from Raheny, Dublin had all pleaded not guilty.

On day 89 of the longest running criminal trial in the State’s history a jury convicted Casey. They had already returned guilty verdicts on Bowe and McAteer a week earlier. The jury deliberated for a total of 65 hours.

Sentencing McAteer to three and a half years, Judge Nolan said he had authorised the transactions when he knew what he was doing was underhand, deceitful and corrupt. He said he was a respected leader of huge experience whose actions in 2008 were reprehensible.

He told Bowe that his was the chief man in Anglo’s Treasury room and he had failed to act with honesty. He told him that in law following orders was no defence. He imposed a two year sentence on Bowe, telling him the lower sentence was because he was “a lesser functionary” and not a board member.

He told Casey that he had made a grave error of judgement in authorising the transaction with Anglo. He said he was a man who should have known better. He jailed him for two years and nine months after telling him that Anglo were the authors of the scheme but that he had behaved disgracefully and reprehensibly in co-operating with it. Casey told gardaí that he only agreed to the short term loans with Anglo on condition that there was no risk to his company and that he did not know or intend that Anglo would misrepresent the loans as customer deposits.

McAteer is the only one of the three to have a previous conviction. He was convicted in 2014 of providing unlawful loans from Anglo Irish Bank to 10 property developers, dubbed the “Maple Ten”, in July 2008 in breach of Section 60 of the Companies Act. He carried out 240 hours of community service in lieu of a two year prison sentence.

The court also heard that McAteer had a large shareholding in Anglo that was once very valuable and had lost “tens of millions” of euro when the shares collapsed in value.

Judge Nolan said that none of the men had gained from the scheme and that there was no loss to the State or the banks as the inter-bank loans cancelled each other out.