Annual decline of €568 million in line with Government targets 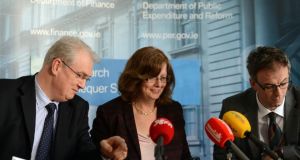 Ann Nolan, Second Secretary Dept of Finance, with John Palmer, Principal,Dept of Finance (left) and David Owens, Principal, Dept of Public Expenditure and Reform, at the presentation of the Exchequer Returns for End-March 2013, at the Department of Finance today. Photograph: Eric Luke/The Irish Times

The Exchequer deficit for the first quarter of 2013 stood at €3,695 million, €568 million lower than in the same period of 2012. According the Department of Finance and the Department of Public Expenditure and Reform, the size of the reduction was in accordance with December’s budget targets.

“Both total tax revenue of €8,816 million and the net voted expenditure outturn are in line with targets,” they said in a statement yesterday. They also noted that the figures mean the Government has adhered to the first-quarter target set as part of the EU/IMF Programme. This was “the tenth consecutive such target to be achieved,” officials stated.

On an underlying basis, which adjusts for one-off factors, income tax increasedby €267 million in March year-on-year. The Department of Finance said that this could reflect a stabilising of the labour market.

VAT, which is the second-largest source of revenue, recorded cumulative growth of €8 million year-on-year, or 0.2 per cent, in the first quarter of the 2013. However, a decrease of €41 million (3 per cent) was recorded on a monthly basis in March.

March also saw the first receipts of Local Property Tax flowing to the Exchequer. The Department described the €1.3 million it received as “particularly encouraging” given that payments are not due until much later in the year.

On the spending side, Exchequer outlays amounted to €10,935 million in the first quarter. This represents a like-for-like decrease of 4.2 per cent year-on-year.

While nearly all departments are showing a year-on-year spending decrease, according to officials, the main declines were on social spending and education.

Social protection expenditure showed an underlying year-on-year decrease of 3.1 per cent (or €324m) compared to the first quarter of 2012.

Current spending on education and skills (ie excluding capital spending on building schools and the like) decreased by 4.7 per cent (or €105m) year-on-year. This is largely due to lower expenditure on superannuation payments compared to the same period last year, according to the department.

Commenting on the end-March returns, the Minister for Finance, Michael Noonan, and the Minister for Public Expenditure and Reform, Brendan Howlin said that the results highlight “that the Government’s plan to restore order to our public finances is working. Tax revenues continue to grow in line with profiles and expenditure on public services is within budget. Stable public finances are a necessary pre-condition for economic growth, job creation and the return of international confidence in this country. There have been positive developments on all three of these fronts.”

“We we still have a sizeable deficit in our public finances that we must bridge. We have to reduce our level of spending and increase the amount of revenue we collect in order to close that gap further and bring about renewed public finance sustainability,” they said.