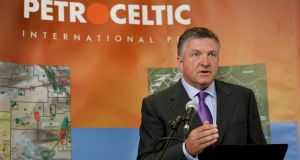 Pre-tax losses at exploration firm Petroceltic International widened to $5 million (€3.79 million) in the first half of the year, despite soaring revenues.

Revenues meanwhile increased from $291,000 in the first six months of last year to $103.7 million in the first half of this year.

“From an operational perspective, the business performed largely in line with expectations, despite occasionally challenging conditions and political transition in some of our areas of operation,” chief executive Brian O’ Cathain said.

He said exploration drilling activity during the first half of the year was limited to the unsuccessful Kamchia well in Bulgaria and the Mesaha-1 well in Egypt.

However, the second half of the year will see a significant acceleration of activity, with the drilling of some of our most important high-impact prospects in the Kurdistan Region of Iraq and Romania.

“We are now entering a period of potentially transformational exploration activity with high impact drilling campaigns in Kurdistan and Romania,” he said.

The exploration firm has secured $500 million in refinancing in a deal led by HSBC and the IFC.

The money replaces a $300 million (€227 million) 18-month facility provided to the Dublin and London listed firm last year to support the takeover of Melrose Resources.

The loan has a maximum term of seven years, and can be drawn down to support existing business, planned developments and potential acquisitions.

Petroceltic has forecast a production range of 24 to 25.5 thousand barrels of oil equivalents per day for 2013.

1 Suspicions rife as key Brexit trade talks begin in Brussels
2 Life as a Facebook moderator: ‘People are awful. This is what my job has taught me’
3 Irish companies restrict travel over coronavirus fears
4 Bogus notion that supply will cure our housing woes
5 ‘The only time apartments were viable was in . . . Ballsbridge, Killiney and Dalkey’
6 How well paid do you think you are? Here’s how to work it out
7 Why Irish banks are now looking beyond vulture funds on problem loans
8 First time buyers behind large increase in new mortgage approvals
9 Coronavirus rocks financial world as hopes for containment fade
10 Corona beer firm reeling after 8% slide due to coronavirus
Real news has value SUBSCRIBE