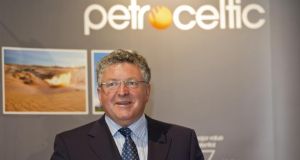 Petroceltic chief executive Brian O’Cathain. Petroceltic International has urged shareholders to vote against the resolutions proposed by Worldview at the upcoming EGM.

Petroceltic International, the exploration company embroiled in a bitter struggle with its major shareholder Worldview Capital, has launched an intensive campaign to lobby its 9,000 small retail shareholders ahead of a vote called by Worldview this month on whether to oust its chief executive, Brian O’Cathain.

Russian-backed activist shareholder Worldview, which has a 29 per cent stake in Petroceltic, is at loggerheads with the company over a string of alleged corporate governance failings, which it blames on Mr O’Cathain.

The company has strongly rejected all of Worldview’s complaints. Worldview and Petroceltic’s board have put forward competing motions at an upcoming extraordinary general meeting to appoint new new board members.

Ahead of the EGM called by Worldview on February 25th in Dublin, Mr O’Cathain told the Irish Times that Petroceltic has “teams of people” calling its smaller shareholders asking them to vote with the company.

“We have no formal programme to communicate with our retail shareholders, many of whom are Irish, but we are contacting them now. Every vote counts,” said Mr O’Cathain.

“We have also spoken to all of our [INSTITUTIONAL]shareholders. We are confident we will win, but we are not complacent,” he said.

Mr O’Cathain said he is prepared to “sit down and talk” with Worldview at any time, “but they won’t take our calls”. He also said he feared that Worldview may try to break up Petroceltic and sell it off if it gains control of the board, although Worldview has never stated such an intention.

Mr O’Cathain also said he “would not be surprised” if Dragon Oil, which aborted a takeover bid for Petroceltic in December because of the drop in oil prices, came back with another bid for the company.

“I have no knowledge that they intend to,” he said. “But it’s possible they might want to talk to us again.”

Under stock exchange rules, analyst Peel Hunt said Dragon could mount another takeover approach for Petroceltic as soon as March, with the imprimatir of Petroceltic’s board. Mr O’Cathain said it would look at a new offer if it came.

Worldview this week urged Petroceltic shareholders to oust Mr O’Cathain, because the company was “on a crash course to further value destruction”.

It accuses Petroceltic of reneging on an agreement to undertake a strategic review in return for Worldview’s consent to a $100 million share placing last year, which Petroceltic rejects.

“Worldview’s attempt to take control of Petroceltic risks serious damage to the company’s North African assets and their proposed technical strategy for Algeria and Egypt is flawed,” Petroeltic said in a statement.

The board said it believes that an alternative strategy proposed by Worldview demonstrates a serious misunderstanding of the assets owned by Petroceltic.