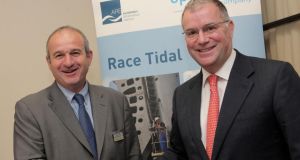 
Openhydro, the Dublin-headquartered tidal energy company, has signed a joint venture with a Channel Islands outfit to develop one of Europe’s largest renewable energy projects in a €600 million deal.

Openhydro, which has a turbine manufacturing facility in Greenore in Co Louth, has formed a new company, Race Tidal, to develop the 300MW project, in conjunction with Alderney Renewable Energy (ARE). Openhydro, which is majority-controlled by French submarine technology company DCNS, also owns a 31 per cent stake in ARE.

The development, which is ultimately expected to export large amounts of power to Britain and France, will take place in two phases.

The first phase will take until 2018 and involves Race Tidal obtaining all the necessary permits to drop up to 150 of Openhydro’s turbines into the sea off the coast of Alderney.

The second phase will take a further two years and involves the construction and installation of the turbines, with much of the work due to take place at Greenore, although Openhydro will also open a manufacturing hub at Cherbourg in France.

Peter Corcoran, the chief financial officer of Openhydro, said the initial phase will require modest capital expenditure of just £3 million. The second, much more capital intensive phase, is likely to be financed by a major power utility, which will be selected at a later date and brought in as a partner on the project.

Mr Corcoran said it was likely that the power produced, enough to supply 1.5 million homes, would be exported via the proposed FAB Link interconnector between France and Britain, in which ARE holds a stake. “The area off the coast of Alderney is one of the best tidal resources in the world, and ARE already has exclusive rights to it. It is estimated at about 3 gigawatts of capacity, so this project is only 10 per cent of the potential.”