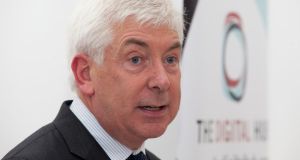 Minister for Communications, Energy and Natural Resources, Alex White:His department did not respond to a request for comment on the Now Ireland submission yesterday. Photograph: Peter Houlihan

Ireland is likely to miss its renewable energy targets for 2020, resulting in hefty fines and a possible ban on green energy exports, according to the National Offshore Wind Association of Ireland (Now Ireland).

The EU has committed to sourcing 20 per cent of its energy needs from renewables such as wind, solar and biomass by 2020.

As part of this, the State has pledged to generate 40 per cent of its electricity consumption from renewables.

However, Now Ireland claims rising energy needs linked to an upturn in the economy combined with a dwindling number of suitable onshore wind energy sites will see the State fall short of this target .

Apart from the ensuing fines, the breach could prohibit Irish renewable energy generators from exporting power into Europe.

The idea of imposing such an export ban on rogue states is gaining traction in Brussels and is likely to be promoted by Maros Sefcovic, vice president of the European Commission, in charge of Energy Union, during his visit here this week.

The biggest losers in such a scenario would be the offshore wind energy generators, which have effectively been shut out of the domestic market via the current system of price supports.

Secretary general Brian Britton said: “Successive Governments have placed all their eggs in the basket of onshore wind. Other technologies, such as offshore wind, have been pushed towards the export route to market,”

“ If the Government’s narrow focus fails to deliver, Ireland will face significant fines and the offshore wind industry, which could deliver the entire renewable energy shortfall for Ireland, will be locked out of the export market as well as the home market.”

“This would work directly against the aims of the European Commission through its Energy Union priority as it strives to eliminate reliance on Russian gas through maximising renewable EU energy resources,” he added.

Minister for Energy Alex White recently acknowledged the second half of this journey would be more “ challenging” because of growing energy demand and the dearth of viable onshore wind sites.

His department did not respond to a request for comment on the Now Ireland submission yesterday.

1 We are ‘sale agreed’, but can we go back with a lower offer?
2 Working from home: New costs, new stresses and little relief
3 Eason to lay off 150 staff as it prepares for June reopening
4 ESB shelves plan for €500m electricity generator at Poolbeg
5 Joint accounts: if one of us dies, can the other access the money?
6 HSBC board rethinks overhaul and seeks even deeper cuts
7 Ryanair almost certain to oppose German government’s bailout of Lufthansa
8 ‘Over 1,000’ pubs have interest in Covid-19 insurance test case
9 ‘I’ve so many outgoings with family life . . . it puts manners on you’
10 Restaurants and gastropubs hope to avoid a dry reopening
Real news has value SUBSCRIBE