Pair to use compressed air technology 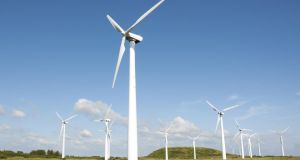 The idea is to use cheap, excess power generated from wind farms during periods of low or off-peak demand to pump the air into the caverns. It will then be released to generate power when demand is high.

Dresser Rand to invest €355 million in a new energy storage venture in Antrim and to seek similar projects elsewhere in Europe.

The pair have formed a strategic alliance to develop compressed air energy storage facility at the Irish company’s site in Larne, Co Antrim, at an estimated cost of €355 million.

The system involves using electricity to pump and compress air into caverns built between salt layers at about 450m to 850m below the earth’s surface.

The air can then be released to drive turbines to generate electricity.

The idea is to use cheap, excess power generated from wind farms during periods of low or off-peak demand to pump the air into the caverns. It will then be released to generate power when demand is high.

Generating electricity
Dresser Rand built one such system in the US in the early 1990s for Power South Energy Co-operative in McIntosh, Alabama.

The system generates enough electricity to supply about 110,000 homes and has been operating commercially since 1991.

It uses natural gas to compress the air in the first place, but only requires one-third of what a conventional plant with the same capacity would consume.

The only other compressed air energy storage plant in the world is at Huntorf in Germany. If the Larne project goes ahead, it will be the first built in about 20 years.