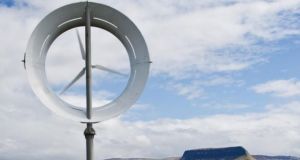 Longford-based wind energy firm Airsynergy has completed a €2 million funding round that values the company at €40 million.

Airsynergy said Irish-American businessman Gerry Ryan, who is chief executive of Aris Renewable Energy, and his business partners, Brendan Ahern and Daniel Ahern, had taken the stake in the company.

Ryan, who won the Ernst & Young Entrepreneur of the Year Award in 2002, is to join the Airsynergy board as a non-executive director.

Aris Renewable Energy had previously obtained a license from Airsynergy to develop, manufacture and sell wind turbines and wind-powered street lights using its technology in the US and Caribbean.

Airsynergy said it has raised €5 million from its directors and investors over the last five years. It intends to hold a further funding round later this year.

The company also announced that Thomas Nulty has been appointed chief operations officer. Mr Nulty, a qualified accountant, was formerly divisional manager with Quinn Plastics, general manager with Foamalite and spent 11 years with Kingspan. He replaces former Setanta chief executive Colin Morgan, who will be returning to his role as a non-executive director.

Other new hires for the company include Dr Naill McMahon who left his job as director of the Centre for Renewable Energy at Dundalk Institute of Technology to join Airsynergy in late January.

Smyth founded Longford-based Airsynergy with his brothers and Adrian Kelly in 2008 to develop technology which allows wind turbines to double their energy output for an additional 20 per cent increase in cost. The company, which currently employs 14 people, won the Engineers Ireland Technology of the Year Award in 2013 and is currently a finalist for the Irish Times InterTradeIreland Innovation Awards 2014.