What to expect from Europe in the coming year

Euro crisis is not over but policy debate has concluded 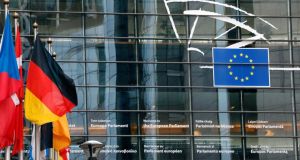 Hordes of anti-European parties are preparing to march on the gates of Brussels. Photograph: Reuters/Francois Lenoir

The euro crisis is not over, but one important shift has taken place. The policy debate has concluded. The decision not to set up a common backstop for the euro zone’s banks has closed the last window for any form of debt mutualisation as a tool of crisis resolution.

All of the adjustment will take place through austerity and price deflation in the periphery. Most of the adjustment still lies ahead. Furthermore, it has been decided that debt burdens will be reduced by paying them off – not by inflation, default or debt forgiveness.

Awe-inspiring
If you look at this with a knowledge of economic history, this is an awe-inspiring set of choices, to put it mildly. The only policy innovations to soften the harshness are two existing backstops: the European Central Bank’s as yet untested Outright Monetary Transactions (OMT) programme, through which it can buy the debt of troubled states; and the European Stability Mechanism (ESM).

The end of the euro policy debate naturally shifts the focus of interest. What matters now is the adjustment itself and the sturdiness of the OMT. In the first half of this year, keep an eye on three events with a bearing on these questions: a forthcoming ruling on the OMT by the German constitutional court; decisions by the Italian government; and the elections to the European Parliament.

No jurisdiction
The German constitutional court may, or may not, demolish the credibility of the OMT programme. It is an odd case because the court has technically no jurisdiction over the ECB. But it could, for example, demand that the German government, parliament or central bank – over which bodies it does have jurisdiction – act in such a way as to stop the implementation of this programme in practice.

Or it might impose other restrictions that would have a similar effect. For example, the court could insist that the German authorities insist on predefined financial caps for any intervention by the ECB - or that interventions require a full and open vote by the Bundestag, a sentence of death by procedure. The court has some leverage because OMT interventions are limited to countries with ESM programmes. And these programmes are subject to a national veto.

German accent
Looking to the second event, Italy’s importance to the future of the euro zone can hardly be overstated. With no prospect of any form of debt mutualisation, Italy has only one single course of action left if it wants to prosper in the euro zone. Its economy must become like Germany’s.

I doubt that is feasible, but this is the choice successive Italian governments have made and is the choice that determines the reform agenda. Italy will need to fix its banking sector to end its credit crunch.

If the goal is to become like Germany, it will also need to reduce net labour costs to German levels – and the most effective tool for that is cuts in the taxes businesses pay on labour. With no fiscal room for manoeuvre left, tax cuts of 1-2 per cent of gross domestic product would have to be completely offset by cuts in public expenditures or rises in other taxes.

Debt ratios
The strategy on debt reduction will be even harder. I expect Italian output to stabilise this year, but not to bounce back strongly. Debt ratios will therefore not come down through high nominal GDP growth.

That leaves only one strategy: the one outlined in the euro zone’s fiscal compact, in which Italy has agreed to repay debt equivalent to 70 per cent of GDP over the next 20 years. This in turn requires a primary fiscal surplus – that is, the surplus before the payment of debt interest – of historically unmatched scale and length. Even advocates of economic reform, such as prominent Italian economist Francesco Giavazzi, argue that structural reforms may require a period in which budget deficits overshoot the official ceiling.

The third event is the European Parliament election in April. This will give us some indication of whether the political support for this type of adjustment enjoys continued political support in Italy and other periphery countries.

Hordes of anti-European parties are preparing to march on the gates of Brussels. Together, they could gain up to one-third of all votes. The problem is not only their combined voting power but also their impact on the leading centre-right parties, which are becoming more eurosceptic as well.

Banking
Notably absent from my list is the ECB’s asset quality review of the banking sector. The reason I no longer take a big interest in this exercise is the way the policy debate has concluded: the pitiful remnants of banking union matter to the institutions affected and to the bureaucrats with shiny new jobs in supervision – but, in the absence of a common backstop for failing banks, not to the economy.

This is the year when the emphasis shifts from the policy choices to their consequences. The euro zone’s leaders have settled on an adjustment strategy of a historically unprecedented scale, flanked by a backstop whose main construction element consists of fairy dust.

By the end of the year, we will have a clearer idea of whether that set of choices is feasible. – ( Copyright The Financial Times Ltd 2014)

1 Bank leaked my loan request to family who tried to rip me off
2 Ryanair and Aer Lingus monitor impact of coronavirus on travel to Italy
3 Boris Johnson's new immigration regime will damage much more than industry
4 Mastercard to create 1,200 new jobs by expanding base in Dublin
5 How can I view my dead brother’s will if I’m not the executor?
6 ESB called out for ‘contributing to human rights violations’
7 Garda mobile contract win causes concern over Eir’s use of Huawei kit
8 Exposed to coronavirus: How Irish business is coping with fallout
9 Big Tech fines delayed, ESB called out and don’t believe the Facebook blitz
10 AIB lines up former HSBC executive McDonagh as chairman
Real news has value SUBSCRIBE