US issues new rules to clamp down on tax ‘inversions’ 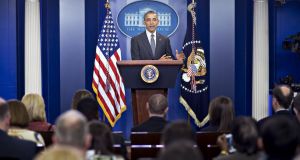 The US government has issued new regulations aimed at clamping down on so-called tax inversions, a practice whereby multinationals shift their tax base to lower tax jurisdictions in order to reduce their bills.

The EU has been in the crosshairs of US politicians for years, as multinationals have sought to avoid the US corporate tax rate of 35 per cent. The Republic has long been a destination of choice for big corporations because of its 12.5 per cent rate.

Minister for Finnce Michael Noonan has previously defended the Republic’s tax practices, saying inversion deals were the result of tax issues in other jurisdictions that give rise to “negative perceptions” in terms of Ireland’s tax code.

On Thursday, the US Department of Treasury and the Internal Revenue Service issued “final regulations” that will further reduce the benefits of corporate tax inversions and “level the playing field between US and non-US businesses”.

The US government said the move would limit the ability of companies to lower their tax bills through transactions involving debt that do not support new investment in the US. The rules will also reduce the incentive for companies to engage in inversions.

The regulations also require large corporations claiming interest deductions to document loans to and from their affiliates, just as businesses of all sizes do when they borrow from unrelated lenders.

“We have taken a series of actions to make it harder for large foreign multinational companies to avoid paying US taxes and reduce the incentives for US companies to shift income and operations overseas,” said Treasury Secretary Jacob J. Lew. “Such tax avoidance practices are wrong and should be stopped,” he added.

Specifically, the regulations will narrowly target problematic “earnings stripping” transactions that generate deductions for interest payments on related-party debt that does not finance new investment in the US.

The US government said the rules would seek to minimise “unintended consequences” for regular business activities.

1 In this strangest of recessions, what happens next for Ireland?
2 Chris Johns: Boohoo exposed on pay and conditions in digital economy
3 Hotel bookings collapse in wake of additional Covid restrictions
4 Should I switch bank now with Ulster Bank at risk of closing?
5 Michael O’Leary is the boss you want to lead an airline out of crisis
6 Harry Crosbie failed to disclose assets, Nama tells court
7 House prices rise by 4.3% amid lifting of Covid-19 restrictions, report says
8 Inside Microsoft’s new Dublin home: an LED waterfall, a digital lake and a DreamSpace
9 Mother-in-law lives in our house and we live in hers
Real news has value SUBSCRIBE