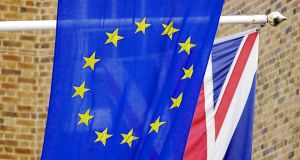 After any Brexit, Britain might accrue a competitive advantage over Ireland from having a more flexible relationship with the EU. File photograph: Tim Ireland/PA Wire

Uncertainty over Britain’s membership of the EU may give Ireland a competitive advantage in attracting investment, according to a leading economist.

Liam Delaney, who is professor of economics at Stirling University in Scotland, said investors may perceive Ireland as a more stable point of access to the EU market.

He was setting out the possible implications for Ireland of the so-called Brexit scenario at the Dublin Economics Workshop in Athlone.

Conversely, Prof Delaney said Britain might accrue a competitive advantage over Ireland from having a more flexible relationship with the EU.

Equally, uncertainty over Ireland’s trading relationship with the UK may deter or delay flows of foreign direct investment here.

Prof Delaney admitted Brexit remained something of a “nebulous concept”, with the markets adopting a wait-and-see approach.

Nonetheless, he said it should be factored into the risk agenda of prudent organisations, noting how bookies, markets and polls failed so dramatically to predict the outcome of the recent UK election.

British prime minister David Cameron plans to publish details of his demands for EU reform to “quicken the pace” of his negotiations with Brussels ahead of his in/out referendum on membership.

Mr Cameron said he would set out the changes he is seeking in a letter to European Council president Donald Tusk to be distributed to the other 27 EU leaders in early November.

Prof Delaney said trade implications for Ireland were “hugely contingent” on what form Brexit takes, if it happens.

Would the UK seek direct access to the single market via the European Economic Area, similar to Norway?

Or would it forge something akin to the Swiss option under the umbrella of the European Free Trade Association (EFTA)?

Alternatively, might it seek to create a free trading area with the Commonwealth? These were just some of the questions posed by Prof Delaney.

A significant shift in the current tariff arrangements could have the biggest impact, he said, noting Britain accounted for more than 14 per cent of Irish exports.

The biggest loser in this scenario would presumably be Ireland’s food and drink industry, which exports 50 per cent of its output to Britain.