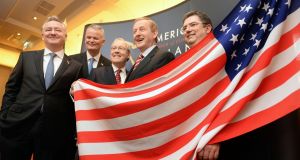 Some 70,000 Irish emigrants will have returned home by 2020 to take up new jobs and build their future here, Taoiseach Enda Kenny has said.

Mr Kenny said that next year, for the first time since the economic crisis began, Ireland could expect to welcome home more people than will leave.

He was speaking at the Thanksgiving lunch of the American Chamber of Commerce Ireland in Dublin on Thursday. “What they carry home with them, their experience and knowledge and confidence, will be a huge boost to Irish business and the Irish economy,” Mr Kenny said.

“We are no doubt at a very important nexus in the Irish-US commercial relationship,” he said. President of the American Chamber of Commerce Ireland Eamonn Sinnott said US firms were responsible for supporting close to a quarter of a million jobs and contributing €16 billion annually to the Irish economy.