Stripe valued at $5bn after Visa joins new funding round 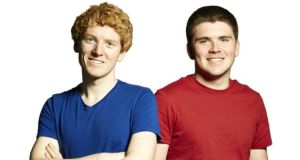 The fact that Visa has chosen to invest in Stripe, not in PayPal, is seen to have huge significance

This is a significant jump for Stripe, coming roughly six months after it garnered $70 million at a $3.5 billion valuation. Stripe declined to disclose the amount of new funding, except to say it was “less than $100 million.”

Founded five years ago, Stripe has quickly gained traction by offering simple software and services for online small and medium-size businesses. Similar to Square and PayPal, Stripe accepts credit and debit cards for merchants who have not taken them previously. Stripe charges a small fee per transaction.

On Tuesday, Stripe also announced a partnership with Visa, one of the world’s largest credit card companies, in which the two will work on ways to improve digital transactions. The companies said they expected to collaborate on initiatives like payments security, as well as software like website “buy buttons.”

Stripe said it would rely on Visa’s global footprint to expand its international availability. Stripe is currently available to businesses in more than 25 countries, and hopes to expand further with help from Visa. “As Stripe thinks about the best ways to move the overall payments ecosystem forward, the biggest determinants on the financial side are the credit card networks,” Patrick Collison, co-founder and chief executive of Stripe, said in an interview. “We hope to continue working closely with them.”

That Visa is partnering with Stripe instead of a larger payments processor is something of a coup for the startup. Visa has become increasingly wary of other payments companies, such as PayPal, which processed more than $220 billion in online transactions last year and this month was spun off from its onetime parent, eBay. While PayPal has handled online credit transactions since the early days of e-commerce, Visa said it became concerned by PayPal’s ability to siphon customer relationships away from card companies and steer customers to debit transactions, in which PayPal sees healthier profit margins.

“They also have a very big business that they then use our transactions to mine from, to disintermediate our clients’ relationship with us,” Charles W. Scharf, chief executive of Visa, said of PayPal in a conference call with Wall Street analysts last week.

A PayPal spokeswoman declined to comment. PayPal also competes directly with Stripe through Braintree, a startup that PayPal acquired for $800 million in 2013. Both companies are popular in Silicon Valley. Stripe, in contrast, has positioned itself as a friend to the major credit networks. It worked with American Express to create a PayPal-like buy button, which became available to online merchants this month.

“Stripe is not competing with the card networks,” said Michael Moritz, a Stripe board member and partner at Sequoia Capital. “The fact that Visa has chosen to invest in Stripe, not in PayPal, is of absolutely huge significance.”