Stability held out as pledge to appease political economy 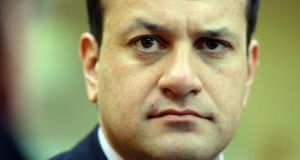 Minister for Health Leo Varadkar, who will speak on political stability at the Institute of Directors today. Photograph: Cyril Byrne / The Irish Times

The Government’s mantra in the coming months will be “political stability”. After assorted remarks this week by Taoiseach Enda Kenny and Minister for Finance Michael Noonan, it is clear enough that this will be at the centre of the coming election campaign.

Minister for Health Leo Varadkar delivers a speech on the topic at lunchtime today at the Institute of Directors. We can expect some of the same from Labour’s conference in Killarney this weekend, albeit with less emphasis than in the Fine Gael ranks.

For a foretaste of the archery to come, however, look no further than the intervention of Minister for Jobs Richard Bruton at an IDA Ireland press conference a couple of days ago. The inward investment agency had just published a strategic plan in which it said the continuation of pro-business policies was crucial for for the achievement of its ambitious job-creation target.

Still, IDA chief Martin Shanahan said there was “no uncertainty” abroad over Ireland’s stance and he added this was more of a domestic issue than an international concern. At that point, Bruton interjected, saying Sinn Féin tax policies were very risky.

“When you have parties like Sinn Féin saying they’ll increase employers’ PRSI; when you have them saying they’re going to have a higher marginal rate of income tax; when you have them on their track record of saying they would raise €5,000 million extra in taxes than has been raised by this Government; you’re clearly on a tax-policy regime that does not protect the competitive base that we’ve had,” Mr Bruton said.

There will be lots more of this, not to mention pointed questions over the rhetoric and stratagems of the hard-left faction.

We already know that international sovereign bond investors have started to raise questions about Sinn Féin’s advance in opinion polls and the onward march of the Independents.

The force of this questioning on the markets varies, for sure, but observers in the world of banking and investment say Syriza’s victory in the Greek election last month brought the matter to the fore. What happens next could have a big bearing on the Irish election.

The new Greek government’s difficulties since taking power are clear – and it is not at all clear that Syriza politicians can tolerate the “constructive ambiguity” embraced in tentative arrangements with European lenders and the International Management Fund.

Indeed, the clear absence of trust between Athens and its lenders points to severe strictures on the terms of the new rescue programme to be settled by June. There is considerable pessimism that a durable deal acceptable to all sides can actually be reached. All kinds of questions about Greek membership of the single currency are raised.

This is the prism through which Irish election promises of major debt relief would be scrutinised. Europe’s failure to deliver direct bank recapitalisation – in spite of a summit-room promise in mid-2012 – is not forgotten.

If a more recent Greek precedent suggests further pledges to Irish voters are unrealistic, then the concentration would be on the policies within Irish control. The scope for fiscal manoeuvre is heavily curtailed, in light of strict EU budget rules and the unwavering gaze of markets.

Still, it is clear extraordinarily low borrowing costs on the open market provide unforeseen wriggle room. A big factor here is the European Central Bank’s new bond-buying campaign, which starts next month. Crucial too is a sense of confidence in markets that Ireland’s recovery is real and set to continue.

As the campaign proceeds, each of the protagonists will have to substantiate promises as to what exactly they would do in power.

For all the increasing stridency of the Government pushback against the Opposition, markets at this point appear to be calculating that the election will produce some kind of stability in the next administration. That could change quickly, of course, and the role of the ECB’s quantitative easing initiative should not be overlooked.

1 Johnny Ronan loses out on €315m Dublin docklands deal
2 Meath site primed for delivery of enterprise and employment
3 Pre-flight Covid tests possible ‘within days’ if given go-ahead – airports
4 Ryanair and Aer Lingus to cut further flights from regional airports
5 Bank of Ireland takes €169m charge for 1,700 job cuts
6 How long can Government afford to keep State pension age at 66?
7 Liquidators appointed to Irish arm of Wirecard
8 How much state pension will I get next year?
9 PTSB plays down Ulster Bank talk as it sells €1.4bn of loans
10 Tesco takes to the skies with home delivery by drone
Real news has value SUBSCRIBE