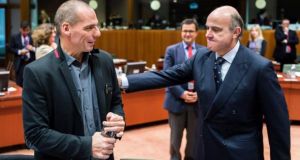 Talks have begun on a third bailout for Greece worth €30 billion-€50 billion, the Spanish economy minister has announced.

“We are negotiating a third rescue for Greece,” Luis de Guindos told a conference in Pamplona on Monday. The minister added that the Spanish government, which has been in a war of words with Athens in recent days, would contribute 13-14 per cent of the new bailout. The deal would provide for “flexibility” and include new conditions for Greece.

Mr de Guindos, who is one of the frontrunners to take over the presidency of the eurogroup of finance ministers later this year, added: “Greece will not leave the euro. It would not be good for Europe and not for the monetary union either . . . For Greece, there is no alternative to European solidarity.”

It has been expected that Greece would have to seek another bailout, but Mr de Guindos is the first European minister to declare publicly that negotiations had begun, and the first to specify the amount of money at stake.

Other officials appeared to play down his claims or suggest they were premature. A spokesman for Jeroen Dijsselbloem, the eurogroup head, said on Monday that eurozone finance ministers were not discussing a third bailout.

But Valdis Dombrovskis, a European Commission vice-president, suggested otherwise. “Greece may need an additional arrangement after this programme expires,” he said, noting that it was unlikely the new government would be able to access financial markets again.

Mr de Guindos’s remarks may have been intended as another volley in aspat between the new Greek government and the leadership in Spain and Portugal. In a speech on Saturday, Mr Tsipras accused Madrid and Lisbon of leading an anti-Greek “axis” in Europe.

“Their plan was and is to wear down, topple or bring our government to unconditional surrender before our work begins to bear fruit and before the Greek example affects other countries,” he said, “and mainly before the elections in Spain.” His remarks sparked anger in Spain and Portugal. –(The Financial Times service)

1 MSD buys Takeda biologics plant in Dunboyne
2 ‘Saudi Arabia is where the opportunities will happen in future’
3 Facebook agrees Irish wind-farm deal with Brookfield in Tipperary
4 State’s biggest landlord records 30% rise in rental income
5 Wirecard was looted before collapse, German prosecutors suspect
6 Refurbished Cafe en Seine doubled sales to €9.5m before pandemic
7 What will the office market look like after the great remote working experiment?
8 Irish tourism must also help itself to survive the pandemic
9 Scars from the crash give Irish banks 2.6 billion reasons for Covid caution
10 Identigen founders make €12m each from sale of company
Real news has value SUBSCRIBE