Creation of 385,000 jobs since 2013 has taken Ireland to the cusp of full employment 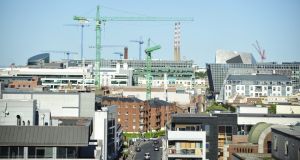 Construction cranes on the Dublin skyline. With building professionals in short supply, recruitment executives are on a global hunt for construction staff. File photograph: Aidan Crawley

Barry Kelly is racking up air miles as the Irish economy booms. With more than 100 cranes visible on Dublin’s skyline and building professionals in short supply, the recruitment executive is on an almost constant global hunt for construction staff.

The Republic’s economy is growing strongly after recovering from the crash a decade ago that sparked 360,000 job losses and a humiliating international bailout. Gross domestic product is forecast to grow at 4.2 per cent in 2019 albeit slower than the 8.2 per cent acceleration in 2018, according to the Economic and Social Research Institute think-tank in Dublin.

The creation of 385,000 jobs since the country began to emerge from the crisis in 2013 has taken it to the cusp of full employment, presenting a challenge for employers and opportunities for workers.

“We’re bringing people in from Europe, from Poland and Romania. We’ve been doing that for years,” said Mr Kelly as he made his way to the airport for yet another flight.

“We’ve been bringing Irish people back from Canada, Australia and the Middle East but that pipeline has now dried up. So [we are] going outside the EU, looking at relevant candidates in South Africa, the Philippines, New Zealand and Malaysia.”

Despite the threat to the Republic’s recovery in the event of a disorderly Brexit, the number of people in work rose in 2018 to a record 2.27 million. Official data show that 26,200 of the 67,100 jobs created in the year to September were filled by non-Irish nationals.

The Central Bank has forecast an unemployment rate of 4.9 per cent for 2019, approaching the level economists equate with full employment. As a result, there is a growing skills shortage in the labour market .

“There are 40 per cent fewer workers in construction, 25 per cent more in education; 10 per cent fewer in retail,” said Austin Hughes, chief economist at KBC Bank Ireland. “This doesn’t really happen in most economies, either the scale of job shedding or job creation in a 10-year period. It is a phenomenal set of changed circumstances.”

Many companies are having to pay more to workers who can choose between jobs. Ibec, a business lobby, says employee turnover has returned to levels not seen since 2007, the year before the crash. The Government has forecast that wage inflation will accelerate to 3 per cent this year from 2.4 per cent in 2018.

Kieran Carolan, chief of Carroll Cuisine, a cooked meats company in Tullamore, Co Offaly, which employs 340 staff, recently visited Moldova to interview prospective recruits. “We run a 24-7 operation and our significant issue would be people migrating from the food industry to higher-paid sectors,” he said. “We’ve done a number of things to make ourselves attractive from a benefits point of view, including paying premiums based on skills and expertise.”

“The three major job titles where we’re seeing the fastest salary growth are quantity surveyor, accountant and line cook. It’s between 7 per cent and 15 per cent for these three over the last year in terms of the posted salary,” he said.

“Things are getting better and better for people who want a job,” he added, “but tougher and tougher for employers.”