London Briefing: Tesco and Poundland to defy deadline for recall of 500m coins 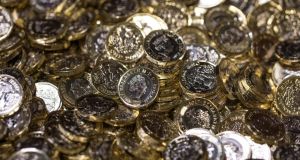 British shoppers will be checking their change very carefully over the next few days, as the deadline for the demise of the round pound approaches.

From midnight on Sunday the coin ceases to be legal tender after 30 years, so shopkeepers and other businesses will refuse to accept them. Or at least they should refuse. But with up to 500 million round pounds thought still to be in circulation, despite the Royal Mint’s efforts to recall them, a growing number of retailers plan to defy the authorities and continue to accept the old coins after the October 16th deadline.

More than a billion old pounds have already made their way back to the Royal Mint, where they are being melted down to produce their 12-sided replacement. One in 30 of those old coins will have been counterfeit, however, which is the driving force behind the switch.

The new coin, which came into circulation in March, is thinner, lighter and, for now at least, shinier than the original pound coin. More important, it has a number of security features, including a hologram that changes from a £ symbol to the figure 1, which makes it virtually impossible to forge.

Retailers appear to have had difficulty telling the difference between the old and new pounds. At one stage about half the coins being returned were new ones

With just days until the deadline, far too many of the old coins remain in circulation, hence retailers’ move to continue accepting them. Tesco, Britain’s biggest retailer, says it will extend the deadline for a further week; Poundland, which describes itself as the official home of the pound, will accept the old currency until the end of the month.

The retailers themselves are partly responsible for the slow progress in gathering up the old coins. Like other businesses, they were tasked with returning the coins to the Royal Mint but appear to have had difficulty telling the difference between the round pound and the dodecagonal version. At one stage about half the coins being returned were new ones.

Shoppers say they are still being handed old pound coins in their change, and some supermarket trolleys, vending machines and rail-ticket machines have yet to be adapted to take the new coins.

Banks, post offices and building societies will continue to accept the old pounds for a while longer, but it’s worth checking down the back of the sofa sooner rather than later.

The scramble to retrieve the old pound coins should spark a mini boost for the UK economy, as shoppers rush to spend what they’ve salvaged from their sofas or piggy banks. But it won’t be enough to dig Philip Hammond out of the multibillion-pound hole he finds himself in, just six weeks before he’s due to deliver his autumn budget statement.

Like any sensible chancellor, Hammond had amassed a war chest, a £26 billion, or €29 billion, buffer built into public finances that would have allowed him some scope for giveaways next month. But his numbers have been torpedoed by the government’s economic watchdog, the Office for Budget Responsibility, which admitted on Tuesday that it had hugely overestimated UK productivity over the past seven years.

A review of its own figures showed productivity has advanced by a meagre 0.2 per cent over the past five years, way below its forecasts. Last year productivity was reported to be growing at 1.5 per cent, and just six months ago the OBR was predicting an increase to 1.8 per cent by 2021.

Treasury officials are describing UK public finances as a bloodbath, estimating that up to two-thirds of Hammond’s £26 billion budget surplus will be wiped out

But on Tuesday it dismissed last year’s figure as “a false dawn”. Its new forecasts will be unveiled along with the budget, on November 22nd. It’s clear the figures will have to be slashed, with a disastrous knock-on effect on output growth and government tax receipts. Treasury officials are apparently describing public finances as a bloodbath, estimating that as much as two-thirds of Hammond’s £26 billion budget surplus will be wiped out as a result.

This puts Hammond in an extremely tight spot, particularly given the promises that his boss, Theresa May, made at last week’s Conservative Party conference of costly help for house buyers and students.

There was no sympathy for Hammond’s plight from unions or political opponents. The productivity downgrades were “a self-inflicted wound”, according to Frances O’Grady of the Trades Union Congress. “Years of cuts, low public investment and rising job insecurity have taken a heavy toll,” she said.

For the shadow chancellor, John McDonnell, the OBR report was “a damning indictment’ of the Tory government and its failed austerity programme. The November budget “cannot be another exercise in kicking the can down the road”, he said.

But that’s exactly what it will be. With little or no room to manoeuvre, the chancellor doesn’t have much choice.