Progress on transatlantic trade deal becalmed as US looks to Asia 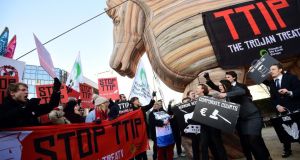 Demonstrators from Friends of the Earth Europe protest against the Transatlantic Trade and Investment Pact in Brussels. Photograph: Emmanuel Dunand/AFP/Getty Images

In June 2013. in the final weeks of Ireland’s European Union presidency, the bloc’s 28 member states gave the go-ahead to Brussels to start negotiating with the United States on a multibillion-euro trade deal.

The battle for the Transatlantic Trade and Investment Partnership (TTIP) had begun.

The idea of a trade deal between the world’s two largest economies has been floated before but previous initiatives, such as the New Transatlantic Agenda in 1995 and the Transatlantic Economic Council in 2007, ended without agreement. The economic crisis refocused minds.

But almost two years on, the project has run into difficulties. Strong public opposition to TTIP has emerged in countries such as Germany, France and Austria, galvanised by public fury over the National Security Agency scandal last year, which revealed how the US had been spying on EU citizens.

MEPs from Finland to Austria and France described last year how TTIP was an issue on the doorsteps during the European elections campaign. In Germany, controversy over chlorinated chicken flared, with German chancellor Angela Merkel referring to the issue during a press conference with US president Barack Obama after the G7 summit in June.

The proposed trade deal aims to strengthen the trade links between the US and EU by further liberalising markets and streamlining standards. Its proponents estimate it could be worth 0.5 per cent to the European economy, and 0.4 per cent to that of the US, as markets in goods and services are opened up.

One of the unique aspects of these particular trade negotiations is that the tariffs on goods bought and sold between the EU and US are already very low. As a result, the main focus of these trade negotiations is on dismantling “non-tariff barriers” – a process that involves everything from regulating standards on food products and pharmaceutical goods, to opening up public procurement processes.

The complex negotiation process spans a range of areas from banking regulation to genetically modified crops and safety standards for cars – fertile ground for interest groups and pro-business lobbies.

There is also concern about the US’s commitment to a deal. In November, Irish commissioner Phil Hogan, who is centrally involved in the negotiations as agriculture commissioner, questioned Washington’s interest in the deal.

“There is no demonstration of a serious intent at the moment to have a TTIP deal on the American side,” he said. “We’ve had a very slow response to position papers that have been put to the American side.”

Suspicions that the US is more preoccupied with completing the ongoing Trans-Pacific Partnership have fuelled concerns that the deal will not be completed during the term of the Obama administration, though US officials say they are still committed to the deal.

But there is also an awareness that EU leaders need to drive the proposal if it has any chance of crossing the line.

“The first issue is the political will,” says André Sapir, senior fellow at Brussels-based think tank Bruegel. “Is there, yes or no, the will to conclude the agreement by 2016? That’s the real question.”

While all 28 EU member states gave their backing to the commission in 2013 to start negotiations, EU leaders such as Merkel and French president François Hollande have been lukewarm at best, acutely aware of public opinion on the issue.

Similarly, the EU-US trade deal got scant mention in last year’s wrangling over who would take the helm at the commission and European Council, raising questions as to the commitment of both institutions to completing the agreement. Within the third main arm of the EU– the European Parliament – the issue is highly controversial, particularly among left-wing political groups, and ultimately it is in Strasbourg that the debate over TTIP is likely to be fought and won.

“The EU and the US should make every effort to conclude negotiations on an ambitious, comprehensive and mutually beneficial agreement by the end of the year,” the post-summit communique said, adding that member states and the commission should step up efforts to communicate the benefits of the agreement and to enhance dialogue with civil society.

According to EU sources, Taoiseach Enda Kenny made one of the strongest interventions in support of TTIP during the meeting last Friday. Speaking later, he told reporters he had briefed the leaders on his discussions last week in Washington, where he met the US chief negotiator Mike Froman and EU ambassador to the US, Irishman David O’Sullivan.

“I was able to give the council a first- hand discussion of my discussions with President Obama, with Mike Froman and the EU ambassador to Washington. I had confirmation that the Pacific trade deal is not interfering with the TTIP situation . . . There is no reason that we should have this strong trade negotiations.”

Today’s event organised by the Government in Dublin Castle is warmly welcomed by officials in Brussels who see it as a rare attempt by individual member states to communicate the benefits of an EU-US trade deal to the public. The event is being spearheaded by the Department of Enterprise Jobs and Innovation – the Minister in charge of it, Richard Bruton, led the TTIP inter-EU negotiations during the Irish presidency.

Employers’ body Ibec is also heavily involved in promoting the deal through its office in Brussels.

With Ireland heavily dependent on the US for trade and investment, the benefits of a trade deal are obvious, but the relative lack of public opposition to the EU-US deal in Ireland since it was first announced almost two years ago also suggests deeper cultural differences between Ireland and some of its continental partners.

The debate over TTIP is falling along traditional lines within the EU, with a clutch of traditionally pro-trade, US-leaning northern countries – including Ireland, Britain and the Netherlands – pushing hard for a deal, while some of the more protectionist countries on the continent are less enthusiastic about the proposal.

Just as Ireland has not seen the kind of public scepticism towards big US tech giants such as Google that has taken hold across Europe, public resistance to TTIP has been less evident in Ireland than elsewhere, though there are increasing signs that TTIP is likely to be co-opted by politicians and activists of the left, with a number of protests planned for today in Dublin. Sinn Féin’s three MEPs , as well as Independent MEPs Nessa Childers and Luke “Ming” Flanagan have been vocal in their opposition to the TTIP proposal.

While today’s event promises to make an important contribution to the debate over TTIP, the EU-US trade deal is far from a done deal. It is likely to remain one of the most contentious issues in Brussels for some time to come.