Piketty says property tax unfair and should be altered 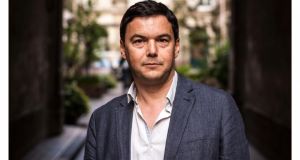 Thomas Piketty: said it was unjust that homeowners with large mortgage debt should pay the same level of property tax as those who owned their homes outright. Photograph: Ed Alcock/the New York Times

The Government should make the property tax fairer by recasting it to take account of mortgage debt and financial assets, according to Thomas Piketty, a bestselling expert on global wealth inequality.

In an interview published in The Irish Times today, Prof Piketty, whose Capital in the Twenty-First Century has been hailed as the most important economics book for a generation, says it was unjust that homeowners with large mortgage debt should pay the same level of property tax as those who owned their homes outright.

“So there’s no reason why you should pay as much property tax as someone who inherited his €400,000 house or who has finished reimbursing his mortgage 20 years ago. This is not fair,” he says.

“For the same tax revenue that you will get from a proportional property tax, I would transfer it to a progressive tax on net wealth, meaning real- estate property value plus financial assets, minus debt, minus mortgage and other financial debt.

Wealth mobility “That would increase wealth mobility. That would make it easier for people who are trying to accumulate wealth but now have a lot of debt to actually enter the game.

“And people who have no debt any more because they have received their house through inheritance or they have other financial assets will pay more.”

Prof Piketty, who next Friday in Dublin will deliver the keynote address at the annual conference of Tasc, the left- wing think tank on social change, says Ireland had an opportunity to make the tax system fairer, even if his proposal might not affect the very wealthiest.

“This is something that can be done at the national level. It’s not as if the property is going to cross the Irish channel and go to Britain,” he says.

“For very top financial wealth it’s more difficult but for normal people, people from €100,000 to €1 million or €2 million – and this is where 95 per cent or 97 per cent of the Irish population would be – you can have some progressivity based on net wealth and that’s going to work.

“It would be stupid to blame Ireland because everybody is doing the same.”

Even if a wealth tax is set very low, Prof Piketty argues, it would serve an important democratic purpose in bringing greater transparency to the distribution of wealth, allowing citizens and public representatives to make more informed decisions.