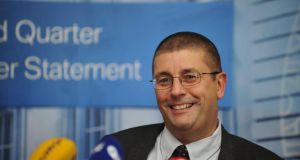 Derek Moran: the senior civil servant selected as the preferred candidate to be new secretary general of the Department of Finance. Photograph: Aidan Crawley

Derek Moran, the senior civil servant selected as the preferred candidate to be new secretary general of the Department of Finance, expressed confidence during the boom that the Irish housing market was in for a “soft landing.”

He told a more junior official in his Department to disregard her fears of a property crash in 2006 and to instead toe the consensus line that a crash could never happen.

Mr Moran was among a number of senior civil servants in the Department of Finance who were repeatedly emailed between January 2005 and early 2007 by assistant principal officer Marie Mackle, where she expressed her concerns about the prospect of a property crash.

He was copied on emails where she said that the “official position” on the housing market in the Department could be badly wrong, based on her own research. She said she did not believe that then taoiseach Brian Cowen’s “soft stance” on the property market was correct.

In June 2006, when dealing with a parliamentary question from Labour’s Joan Burton, Ms Mackle was instructed by Mr Moran to ignore her fears and instead issue a positive statement.

“Go back to them and say this . . . the large increase in new housing supply will restore equilibrium to the market . . . There is a broad consensus amongst commentators that the most likely outcome for the housing market is a ‘soft landing’. The government continues to run a prudent, stability-orientated budgetary policy,” Mr Moran told Ms Mackle.

Mr Moran also told her in 2006 to stop sending multiple emails as she tried to answer parliamentary questions, in ways that would reflect her concerns.

“For future reference I want only one reply to each question . . . (the official) answer is okay with me,” Mr Moran said.

Ms Mackle in November 2010 prepared a 22-page report for a departmental review group into what went wrong inside Merrion Street. It was titled This material is not appropriate: what happens to dissenting Department of Finance employees.

Mr Moran’s appointment will require cabinet approval at its next meeting on Tuesday of next week. Derek Moran is due to replace John Moran, a rare private sector appointee to a senior position in the department.

John Moran resigned unexpectedly from his position in May, only two years after taking command, after a career in banking.

Derek Moran is chairman of the tax strategy group in the department and a council member of the Foundation for Fiscal Studies. He has served on the National and Economic and Social Council, National Statistics Board and the EU’s Economic Policy and Tax Policy Committees.

“The Minister will be bringing a name to cabinet next Tuesday for its approval. I cannot comment further,” a spokesman for the Department of Finance said.

External applications were not invited for the role of secretary general, one of the most important jobs in the civil service.

Independent TD Stephen Donnelly said: “To only look within an institution which failed so spectacularly is wrong. External candidates should have been asked, and we should change the law to ensure that they always are.”