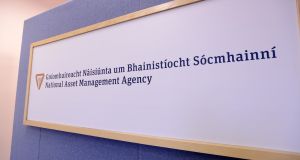 Rating agency Moody’s has said it no longer considers the National Asset Management Agency’s debt as a liability for the Government, largely because of the accelerated wind- down in its debt load since last year.

In a report comparing the performance of “bad banks” in Ireland, Spain and Germany, Moody’s said Nama was the most advanced of all three in selling down its assets.

It noted the Irish entity had already repaid €21 billion, or nearly 70 per cent, of the original €30.2 billion in senior bonds and was on course to repay them in full by 2018 – two years ahead of its original schedule.

It also said Nama was likely to realise a profit for the State when it was finally wound down.

“Given Nama’s strong financial and divesting performance to date, we no longer consider it to be a material contingent liability for the Irish Government, ” the agency said.

“Instead, it is more likely that it will produce a profit for the Irish State, with the company itself expecting a cumulative profit of €1.75 billion,” it said.

In comparing Ireland’s Nama, Spain’s Sareb and Germany’s FMS Wertmanagement, the report concludes the three entities “diverged significantly” in terms of financial performance and success in divesting their impaired assets.