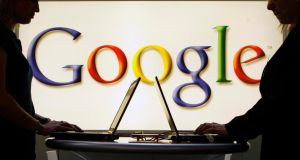 British chancellor George Osborne said last week some of “the largest companies in the world”, including tech giants such as Google, Facebook and Amazon, were using “elaborate structures” to avoid tax. Photograph: Jens Meyer/AP Photo

nationals will be given 30 days to pay a 25 per cent penalty tax by the British Revenue and Customs if it decides that they have improperly shifted profits made in United Kingdom to low-tax locations, such as Ireland and Luxembourg.

The measure, already dubbed “the Google tax”, will be used to punish companies who “enter into contrived arrangements to divert profits from the UK”, according to a briefing paper released by the treasury in London.

Properly titled as the diverted profits tax, which is deliberately set at five percentage points over the UK’s corporation tax rate that will be in force next year, the treasury hopes it will raise £1 billion over the next five years.

In the House of Commons last week, the chancellor George Osborne said some of “the largest companies in the world”, including tech giants such as Google, Facebook and Amazon, were using “elaborate structures” to avoid tax.

Companies would face the tax if Revenue decided “it is reasonable to assume” that the multinational was using a foreign-based subsidiary to serve the UK market whose “main purpose” was to avoid UK corporation tax.

The chancellor’s decision to impose the penalty tax reflects growing public and political anger in Britain at the tax practices of major multinationals. Amazon’s British subsidiary paid £2.4 million in British corporate tax, despite enjoying £4.3 billion worth of sales.

Policy change It also marks a significant change in policy, since Mr Osborne had previously repeatedly insisted that global action, rather than action by individual states was needed to cope with multinationals’ tax practices.

This point was highlighted by the director-general of the Confederation of British Industry, John Cridland. “International tax rules are in urgent need of updating but there is already an OECD [Organisation for Economic Co-Operation and Development] process under way.

“It is unfortunate that the UK has decided to go it alone with a diverted profits tax outside this process, which will be a real concern for global businesses. The legislation will be complex to apply.

“If other countries follow suit, businesses will have a patchwork of unco-ordinated unilateral rules to navigate, which risks undermining the whole OECD approach,” Mr Cridland said.

Covering profits made in Britain after April 1st, 2015, it is designed to combat situations where companies use non-UK resident companies to serve UK-based customers, or where they use other methods to avoid having a UK taxable presence.

However, the tax is vulnerable a legal challenge under EU freedom of movement of capital rules.

Complicated rules Under complicated rules published yesterday, multinationals must notify Revenue and Customs if they think they are liable to the tax. If Revenue believes a penalty tax is due, it must be paid within 30 days.

Happy for the new levy to be called “the Google tax”, the treasury has specifically cited “the double Irish” – the tax structure used by a number of multinationals to shunt profits between Ireland and tax havens such as Bermuda, with almost nothing being paid in tax.