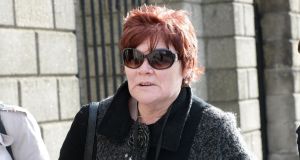 The Supreme Court has reserved judgment on the appeal by Independent TD Joan Collins against the High Court’s rejection of her challenge to the Minister for Finance’s issuing of €31 billion promissory notes in 2009 for Anglo Irish Bank and other financial institutions.

The death of Mr Justice Adrian Hardiman last month meant the appeal, which opened before a seven judge court in March, concluded today before a six judge court presided over by the Chief Justice, Ms Justice Susan Denham.

At the outset today, the Chief Justice noted the court had written to the parties concerning how to proceed following the death of Mr Justice Hardiman.

She said it was proposed to continue the appeal before six judges and, if the court ultimately split three/three on its decision, there would be a fresh appeal before a seven judge court.

If there was no such split, the six judge court would deliver its judgment after deliberating on the arguments.

After both sides consented to that approach, the appeal resumed for about an hour before concluding . Ms Collins was in court.

The case relates to promissory notes issued for Anglo, Irish Nationwide Building Society and Educational Building Society. Anglo and INBS were later nationalised. After their successor in title, Irish Bank Resolution Corporation, was wound up in 2013, the Anglo note, on which €25 billion was then outstanding, was converted into long-term Irish government bonds. The EBS note no longer exists following the reorganisation of the finances of Allied Irish Banks, owner of EBS.

In her appeal, Ms Collins maintains the notes were impermissibly issued without a Dáil vote in breach of constitutional provisions dealing with appropriation of public money.

The State contends the Minister was empowered to issue the notes under a 2008 law, the Credit Institutions (Financial Stabilisation) Act, enacted by the Oireachtas with the aim of averting a banking collapse. The notes were security for continuation of emergency liquidity assistance from the Central Bank for the banks after the government provided the controversial bank guarantee of September 2008.

Ms Collins has advanced two core arguments in her appeal. She maintains a statutory power to charge the central fund is unconstitutional unless (1) that charge is pre-quantified or there is an outer limit on it and unless (2) the imposition of the charge has been considered in advance by the Dáil.

In his closing arguments for Ms Collins, Ross Maguire SC, with John Rogers SC, said the case is ultimately about the democratic nature of the State and the requirement for Dáil control of budgetary policy.

The Oireachtas cannot, under the Constitution, pass laws that divest itself of budgetary control, he said. In this case, there was no amount or time limit specified for the promissory notes and the recipients of that public funding were not defined beyond “credit institutions”. That all divested the Dáil of the control necessary to be in control of budgetary policy, he submitted.

Ms Collins’ complaint was also that, as a member of the Dáil, the position remains that she has effectively no control over the spend of public monies, counsel said.

The then Minister for Finance had said at the time this was going to be “the cheapest bail out in history” and Ms Collins maintained there must be some upper limit specified on the ESM (European Stability Mechanism), he added.

Michael McDowell SC, for the Minister, in response to a request from Mr Justice Peter Charleton, provided messages signed by then Taoiseach Brian Cowen in 2008 concerning appropriation of public monies.

The judge’s request arose from the requirement that, in relation to measures for appropriation of public monies, the government has to provide a message signed by the Taoiseach. The notes from the Taoiseach, dated September 30th 2008, predated the passage of the 2008 Act, the court heard.