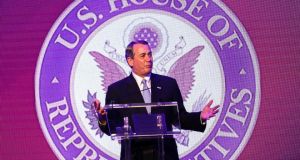 US House speaker John Boehner: says Taoiseach Enda Kenny has harangued him, telling him how the lack of reform has left some Irish immigrants listening to a parent’s funeral by phone. Photograph: Julien Behal/Maxwells

The speaker of the US House of Representatives John Boehner has told a Dublin audience of his determination to overcome Republican resistance to immigration reform. Mr Boehner also told how Taoiseach Enda Kenny has harangued him on the matter, telling him how the lack of reform has left some Irish immigrants listening to a parent’s funeral by phone.

His remarks indicate he may yet move to confront opponents of reform within his own Republican party, which is in the vanguard of resistance to it and has a majority in the House.

The speaker, second in line for the US presidency after Joe Biden, was addressing the Independence Day lunch of the American Chamber of Commerce Ireland. Although he has consistently refused to put immigration reform to a House vote, he said certain colleagues thought the matter would be resolved by sticking their heads in the sand. “It doesn’t work that way.”

Of Republican support for US-EU trade talks, Mr Boehner said his job was to gather “218 frogs in a wheelbarrow and keep ’em long enough to pass the bill”.

He was not long in office when he first met Mr Kenny at his annual St Patrick’s Day lunch in 2011. “The Taoiseach had been in office all of a week,” he said. “We hit it off spectacularly well. I’ve got to say I’m a big fan of his. He’s a funny guy. He’s a serious guy, someone who I can work pretty closely with.”

A year later, they were better acquainted. Imitating Mr Kenny, Mr Boehner said he was seated at lunch between the Taoiseach and President Obama. “The Taoiseach says: ‘John, John, John.’ He says: ‘How’s immigration reform coming?’ ”

Mr Boehner replied: “What the hell do you care about immigration reform?”

Mr Kenny: “Oh John, John. You don’t realise there are about 50k of my fellow Irishmen came to the US and never quite made it back across the pond. You know their cousins have got to hold up the cell phone at their parents’ funeral so their kids in Chicago or Detroit or wherever can listen to the funeral. John, John this is a serious problem.”

Last Thursday when they met, Mr Kenny’s message was concise. “The Taoiseach said: ‘I think you understand, just get it done’.”