The Lehman Legacy: While Irish people have expressed much public anguish in the past five years, research shows that most of us are privately content 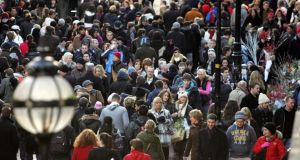 Resilience is like a battery. In the good times it gets “charged” as we store up the resources, habits and relations that will see us through the bad times. It’s the ability to bounce back from disturbance and to cope with adversity. Today, after five years of bad times, it would seem our resilience battery sorely needs recharging.

Nevertheless, on some measures we Irish are still a resilient lot. At the end of 2008 – just months after the collapse of Lehman Brothers – my company asked a representative sample of 1,500 adults whether they had experienced any of a range of emotions or feelings “the previous day”.

Negative emotions are there too, of course – stress and worry, for example – though for a minority of people. While the emotions experienced least are fear and anger. I think this signals a number of things, not just psychological resilience but also a curious, Irish combination of “public anguish and private contentment”.

In the same surveys the vast majority of people tell us how very worried they are about the economy and its prospects. But at the level of their families, friends and colleagues they’re getting by. This might also explain the remarkable quiescence of the Irish in contrast to other parts of Europe experiencing their own recessions.

Consumer spending trend
One indicator of depletion is the trend in consumer spending. Total expenditure is down nearly 20 per cent since its peak in late 2007. In some retail categories, such as pubs, spending is down to levels last seen in the mid-1990s. At the peak our research was showing that consumers still considered convenience more important than price when buying groceries. But in 2008 price overtook convenience as the number one consideration, and it has remained that way since.

In the past five years we have gone from a nation for whom shopping around looked “cheap” to one for whom it now looks “clever”.

Our priorities have changed in other ways as well. In 2008 just six in 10 adults used the internet – today eight in 10 are online, and nearly six in 10 have smartphones. We’ll spend nearly €4 billion online this year, up from less than €1 billion five years ago. A more cautious approach to spending also means we are still able to save despite higher taxes and lower incomes.

This year Irish consumers will save nearly 6 per cent of their after-tax income, quite close to the 7 per cent we saved in 2008, and well up from the 1 per cent we put away in 2007. As a result, the value of Irish private household deposits in Irish banks has risen from €79 billion in September 2008 to €86 billion in June 2013.

A “good” recession
About two in five adults are having “a good recession”. Who are they? In our research they tend to be people with fewer debts than average (the youngest and the oldest age groups), as well as those who still have “options” thanks to fewer commitments (eg: renting, smaller families, etc) or more resources than average (eg: a higher savings capacity, two incomes, etc).

But if some segments in the population have been relatively insulated from the worst of the recession, they have become fewer in number as time has gone on.

The main financial priority for the vast majority of people in recent years has been paying off their debts as quickly as possible.

Our research shows that 30 per cent of people with mortgages reckon they are now in negative equity (ie: the value of their home is worth less than what they owe on it). This jumps to 55 per cent of home owners in their 30s. Furthermore, a quarter of all mortgage holders have missed one or more mortgage payment recently.

Five years on, and many Irish consumers are running out of road. Their resilience battery is flat. Yes, there are a few signs of improvement: in parts of Dublin, for example, or in some sectors of the economy such as IT and dairy farming.

But it’s patchy at best, and woefully inadequate at worst. Irish consumers spent €94 billion in 2008; this year they’ll struggle to spend €83 billion. The good news is that the younger generation that has come of age during Ireland’s recession doesn’t intend to let it get in their way. The vast majority of 18-30-year-olds we surveyed recently intend to buy their own house by the time they’re 35; the majority expect to be married by the time they’re 30; and almost all expect to be a parent by 35 as well. We need our youth to be optimists.