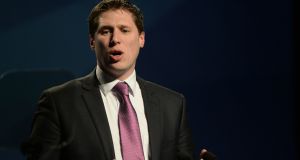 Sinn Fein’s Matt Carthy has launched a stinging attack on Ireland’s corporate tax regime, arguing that Ireland’s reputation as an “enabler of massive tax avoidance for large corporations” is justified.

Sinn Fein’s Matt Carthy has launched a stinging attack on Ireland’s corporate tax regime, arguing that Ireland’s reputation as an “enabler of massive tax avoidance for large corporations” is justified.

Addressing the European Parliament in Strasbourg on Tuesday, the Midlands-North West MEP criticised the last government’s move to abolish the controversial ‘Double Irish’ tax structure, pointing out that companies such as Google and Microsoft have until 2021 to restructure their tax avoidance techniques.

“My home country of Ireland has a reputation as an enabler of massive tax avoidance for large corporations and the wealthy in society and unfortunately the perception is true,” he told the European Parliament chamber during a debate on corporate tax avoidance. He said that the loopholes in the Irish tax system “have been designed to perfectly implement the loopholes in US tax law to benefit massive US corporations.”

He also criticised the move to introduce a new “knowledge box”, a special tax rate that would be applied for research and development (R&D) activity which was unveiled in Budget 2016.

“We know that this won’t foster innovation, it’s just another tax avoidance mechanism, another handout to millions to multinationals. All the while Irish and European authorities have pushed taxes and charges on ordinary families who are already struggling to cope,” he said.

Mr Carthy was speaking during a three-hour debate on the European Commission’s new anti-tax avoidance package which was announced in January as part of a drive to clamp-down on corporate tax avoidance at EU-level. MEPs are due to vote on the proposal on Wednesday.

Brian Hayes, MEP for Dublin, said that it was vital that the principle of tax sovereignty was preserved in any corporate tax proposal unveiled by the European Commission.

“I believe that the setting of tax rates is a member state competence. Reports such as this go beyond that particular competence,” he told the chamber. He also said that Ireland had fully signed up to recently –agreed OECD rules on base erosion and profit shifting (BEPS).

The issue of corporate tax avoidance has moved up the EU agenda in recent years in the wake of the Luxembourg Leak and Panama Papers scandal. The European Commission announced an anti-tax avoidance package in January, and is due to re-launch proposals for the controversial common consolidated corporate tax base (CCCTB) in the autumn.

Ireland’s corporate tax practices have come under renewed scrutiny in Brussels in recent years, with the EU’s competition arm due to deliver its verdict on the long-running investigation into Ireland’s tax dealings with computer giant, Apple, imminently.

While the EU measures on taxation replicate many of the proposals agreed by the OECD – an international rather than EU body – a number of the EU proposals would be legally binding on member states, unlike the OECD proposals.

Minister for Finance Michael Noonan raised a number of concerns about the new European anti-tax avoidance package at a meeting of EU finance ministers in Brussels two weeks ago.

Referring specifically to Minister Noonan’s concerns, EU economics commissioner Pierre Moscovici, who has been spearheading the clamp-down on corporate tax avoidance at EU level, told MEPs that the European Commission was not looking for a minimum level of taxation.

“We respect tax sovereignty. What we want is effective taxation,” he said.