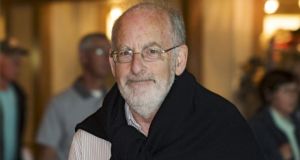 Outgoing Central Bank governor Patrick Honohan: ‘Irish banks mispriced credit risk before . . . are we sure they’re not mispricing in the other direction now?’ Photographic: Jonathan Crosby/Reuters

Noting rates had come down everywhere in the euro area except in Ireland, he said: “This raises a question as to whether these rates are a consequence of insufficient competition.”

In an address to the Small Firms’ Association, Prof Honohan said loan rejection rates here had not fallen to the same extent as they had in other formerly distressed EU states.

Irish banks may be “mispricing credit risk” resulting in relatively high loan rejection rates, he said. While banks were reckless in assessing risk prior to the crash, the pendulum may now have swung the other way, according to Prof Honohan.

Since the tsunami of credit receded seven years ago, lending conditions have been restricted by the shortfalls of capital on bank balance sheets.

“Irish banks mispriced credit risk before . . . are we sure they’re not mispricing in the other direction now?”

Earlier this year, Minister for Finance Michael Noonan met with representatives from the State’s six main lenders over concerns about the comparatively high rates charged for standard variable mortgages.

The issue of high variable mortgages has been a source of controversy with some borrowers on tracker loans paying less than 1 per cent while those on variable rates are paying 4.5 per cent.

Prof Honohan said, however, it was unfair to blame banks for not passing on European Central Bank rate cuts as they did not benefit from them because of the large number of tracker mortgages on their books.

“It’s not that banks are laughing or gouging . . . but it still doesn’t mean everything is right in the system,” he said.

Prof Honohan, who hinted he would be returning to academia upon stepping down as governor, appeared to rule out intervening in the marketplace to address the issue of interest rates, suggesting this could make the problem worse.

“We could all do with more competition in the banking system. I’m hoarse encouraging new investors to come into the Irish banking system in whatever way – acquisition, new start-up,” he said.

In his address, Prof Honohan said Ireland’s forecast growth rate of 6 per cent for 2015 had to be treated with great caution because of the complexities of accounting of the multinationals.

Since the middle of 2012, about 130,000 jobs have been created, mainly by the private sector, which pointed to a “solid, not dramatic, recovery”.

Small Firms’ Association chairman AJ Noonan called on the Government to commit once and for all to end the tax discrimination of small business owners and self-employed, who do not enjoy the same employee tax credits or PRSI benefits.

“To me it is shocking that we have members of government jumping up and down about taking swathes of people out of the Universal Social Charge trap while at the same time discriminating against the very people who create those jobs,” he said.