What’s the difference between a comedian and an economist? 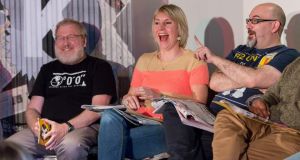 “Leave the jokes alone!” warns comedian Karl Spain, after former US banking regulator Bill Black upstages him with a gag on the Friday night of Kilkenomics. “Because there’ll be no economic theory coming from me.”

The spirited comedy and economics festival, started by David McWilliams and Richard Cooke, usually has clearly defined boundaries between its funny folk and its money folk.

This was a troubling demarcation dispute. “There were union tickets coming out,” admits fellow comic Dermot Whelan the next day. The comedians, he suggests, nearly walked off the job.

The highflying economists found at Kilkenomics already have a maverick disposition. This is clear at Friday’s SAS Young Economist of the Year competition where the aforementioned Black, one of the judges, refers to a “drug-crazed roommate” in an anecdote and Nobel-tipped behavioural economist Dan Ariely explains the concept of scarcity with reference to overweight elephant seals who “sometimes kill the females when they copulate.”

“I really hope there’s a point to this,” says worried compere Colm O’Regan, before fine-tuning the story for the school-going audience: “When a male seal and female seal like each other very much…”

These young economists are the future (I briefly meet one impressive young winner, Joseph Morrin). A little latter, Colin Murphy’s excellent play Guaranteed! rakes through the recent past.

Five besuited actors negotiate dialogue laced with real-life speeches and Dail discussions from Ireland’s last boom/bust cycle. I feel almost nostalgic and have to stop myself joining in on the bits I know - “The fundamentals are sound” “There’ll be a soft landing” “Don’t talk down the economy”.

For example, whenever the gleefully villainous stripey-trousered US pundit Max Keiser takes to the stage, I get an urge to shout “He’s behind you!”

Chatting about the future of money at The Hole in The Wall with UL’s Dr Stephen Kinsella and University of Illinois professor Deirdre McCloskey, Keiser engages in some shouty populism aimed at no one in particular.

“You’re being lied to!” he says, to whoops of appreciation from the audience. Keiser has recently been an advocate of the digital currency Bitcoin.

“There’s a flying column of Bitcoin enthusiasts here,” observes compere David McWilliams. The others on the panel are sceptical about this currency.

“Boo!” say the audience. “Let’s get rid of academics!” says Keiser. They cheer terrifyingly (first they came for McCloskey and Kinsella and I did not speak out).

Things are more chucklesome at the ‘Jargon Busters’ event where comedians and economists compete to explain economic terms. (“Animal spirits,” are explained by Karl Spain thusly: “Every Christmas we get our dog drunk”).

After a depressing discussion of “crony capitalism,” Dermot Whelan dramatically rips up the card it’s written on. The next card, picked at random, reads “creative destruction.” “That was ‘creative destruction’,” says Bill Black to a round of applause, again rousing the ire of Spain.

While David McWilliams says the themes at this year Kilkenomics are less specific and more universal than before, there’s still an eager turnout for Saturday’s ‘Boom or Bubble: the Future of Irish Property’.

Some audience members look ready to sprint to the auctioneers if given the right signals. But no-one is particularly cheer-leady. Ronan Lyons talks about a price “spike” in some areas and the changing relationship between house prices and rents. Five years ago, he says “they were spending 40/50 times what it would cost to rent.”

Constantine Gurgdiev shakes his head a lot. “The media will call me Dr Gloomy, ” he says accurately.

Dr Gloomy then pours scorn on real-estate investment vehicles called REITs, discourages a return to property speculation and describes the history of Irish economics as one bubble after another. Ireland is pretty bubbly. “It’s an Aero bar really,” says O’Regan.

At the Set Theatre Pulling it out of our Arse: Economics, Statistics, Predictions and Lies, is an opportunity for economists to show some humility. What did they get wrong personally? Colm O’Regan asks. Max Keiser says he once lost millions over the course of one plane journey. “Your own money?” “Hell no!” he replies.

Keiser gets louder. It’s a show-trial and the academics are in the dock. Daily Telegraph columnist Liam Halligan takes Keiser’s side, for he too is a regular blue-collar stiff confounded by a clueless, cossetted elite. Audience members shout support for Keiser and lambast poor Whelan: “Answer the question!” “You’re wrong!” they yell.

“Next time I’m going to bring a puppet,” sighs McCloskey.

Soon, on the same stage, Dan Ariely is explaining ‘The Honest Truth about Dishonesty’ - the surprising ways humans lie. He tells stories about how self-image, abstraction and minor regulatory changes affect our behaviour. He’s very funny. This shouldn’t be surprising. Behavioural economics undercuts our assumptions with counterintuitive twists, which is also how jokes work.

So I start wondering again about the differences between economists and comedians. Is beardy Bill Black just a financially-literate Bill Bailey? Is Dan Ariely a highly-accomplished Seinfeldian observational comic? Are Max Keiser and his rubber chicken an American Rod Hull and Emu? By the end of Kilkenomics when I look from the scruffy economists to the besuited comedians I can no longer tell them apart.