Brussels upgrades forecast for Irish economy to 4.6% this year 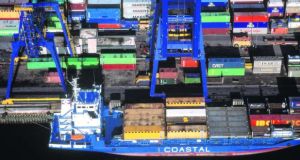 Ireland is set to become the fastest growing country in the European Union this year, the European Commission said this morning, with the economy expected to grow by 4.6 per cent this year.

The European Commission has upgraded its growth projections for Ireland next year, estimating that gross domestic product (GDP) will grow by 3.6 per cent next year, up from the 3 per cent level forecast six months ago.

In its autumn economic forecasts for EU member states published this morning, the European Commission said that Ireland’s second quarter figures had taken observers by surprise, “displaying significant momentum cross the board.” In particular, Ireland’s economic recovery was being fuelled by strong exports, the Commission noted, benefitting in particular from its strong trade relationship with Britain and the US. Addressing reporters in Brussels this morning, European vice-president Jyrki Katainen highlighted Ireland’s strong performance: “congratulations Ireland,” he said.

The strong growth projection for Ireland was one of the few bright spots in today’s economic forecasts, with the Commission cutting its forecasts for euro zone growth, predicting that the euro zone economies would grow by 1.2 per cent next year, down from 1.7 per cent forecast six months ago.

In a sign of the challenges facing the European economy, the euro zone’s largest economies - Germany, France and Italy - are expected to register a slow-down in economic growth, with the Commission projecting growth of 1.1 per cent for Germany in 2015 compared to 2 per cent forecast six months ago. France, which has been battling with Brussels over its 2015 budget, will see its deficit widening to 4.4 per cent of GDP this year, compared with a forecast of 3.9 per cent in May. 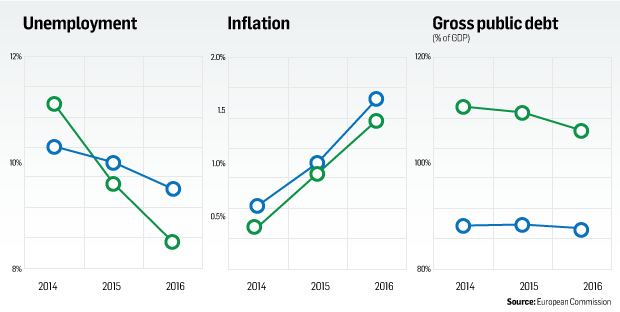 It is expected to see growth of 0.7 per cent next year. Similarly, Italy, the euro zone’s third-largest country will see its economy contract by 0.4 per cent this year, and grow by 0.6 per cent in 2015, compared to May’s estimate of 1.2 per cent next year.

In contrast, programme country Greece is expected to see above-average gdp growth next year, with growth of 2.9 per cent expected in 2015.

Today’s economic forecasts are published against a background of increasing pessimism about the strength of the euro zone economy, as it struggles with sluggish growth, low inflation and continuing high levels of unemployment.

Speaking in Brussels, EU Vice-President Jyrki Katainen said the figures showed that “the economic and employment situation is not improving fast enough,” though he noted that the less favourable global economic conditions had negatively affected confidence in the past few months.

EU specific factors were contributing to economic weakness in the EU and euro area in particular, including structural problems, public and private debt overhang, and unfinished reform agendas in particular countries.

However, Commissioner for Economic affairs Pierre Moscovici noted that most EU countries would grow by 1 per cent next year, noting that growth differences are expected to decline in the coming years. France and Italy, which are expected to see gdp growth of 0.7 per cent and 0.6 per cent respectively next year, would see only a “fragile” recovery, the former French finance minister said.

9 Coming home to west Cork, from all over the world