Ireland ranked as one of the best in terms of reputation 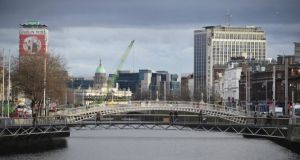 Not such a bad spot: Ireland scored highly in terms of having friendly and welcoming people and a beautiful country

Ireland has been ranked in 11th place out of 55 countries in a new survey ranking nations by their reputation.

The Republic was ranked ahead of the UK, Italy, Germany, Spain, Portugal and France and the US in the Country RepTrak study, which was compiled by the Reputation Institute and its Irish counterpart, the Reputations Agency,

Canada regained top spot from Switzerland in the 2015 survey with a score of 78.1.

It was followed by Norway, Sweden, Switzerland, Australia, Finland, New Zealand, Denmark, the Netherlands and Belgium. With a score of just 22.5, Iraq was ranked as the country with the worst reputation followed by Iran, Pakistan, Russia and Nigeria.

The Country RepTrak study measures the reputation of 55 countries based on a number of factors including trust, esteem, admiration and good feeling.

The survey of 48,000 consumers from across the G8 was carried out via an online poll.

Of the 17 attributes measured, the most important attribute in driving the reputation of a country is “friendly and welcoming people”, where Ireland was ranked in ninth position, unchanged from 2014.

Having a “beautiful country” comes second in importance and here Ireland was ranked in sixth position, compared to ninth place last year. In addition, the Republic was placed 10th in the list of countries that consumers would like to visit.

“Attracting tourists, FDI and high-skilled workforce, improving international diplomacy, and being able to sell Irish products abroad, are all facilitated by having a strong country reputation.

“ The G8 countries are important trading partners and sources of revenue for Ireland, so improving our reputation scores amongst these nations is great news for Ireland’s economy.”