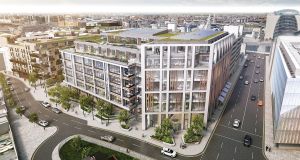 The Sorting Office scheme is currently under development in Dublin’s south docklands.

The closure of the deal represents Mapletree’s first office acquisition in Ireland, and its eighth investment in Europe. To date, the company has spent about €1.49 billion (S$2.3 billion) on four offices and one business park in the United Kingdom as well as a suburban office building in Munich, Germany. Last month, the group purchased an office building in Warsaw, Poland.

The sale of the Sorting Office is set to deliver a significant return for Marlet and its finance partners, M&G Investments. The site was acquired from An Post in 2015 in a transaction valued at €40 million. The news of Mapletree’s intended purchase of the property was first reported by The Irish Times on May 24th.

Commenting on his company’s decision to acquire the south docklands office scheme, Mapletree’s regional chief executive officer for Europe and the United States, Michael Smith said: “We are excited about this opportunity as we have been exploring the Dublin office market for a few years, attracted by the robust tenant demand that has been driven by the city’s strong focus on information and communication technology.”

Mr Smith said Mapletree is confident that the Sorting Office “will be well sought after” by potential occupiers given the fact that it is the only 150,000sq ft plus office scheme due for completion in Dublin’s south docklands in the coming year.

“ It is therefore no surprise that strong pre-let enquires have and will continue to be generated,” he added.

Marlet Property Group chief executive Pat Crean said: “We are delighted that the Sorting Office will be Mapletree’s first investment in Ireland, further enhancing their growing portfolio in Europe. We look forward to other transactions and co-operations in the near future.”

Designed by Henry J Lyons architects, the Sorting Office is located on the corner of Cardiff Lane and Hanover Street East, directly opposite the Bord Gáis Energy Theatre and within close proximity to the European headquarters of several global technology giants including Google, Facebook, and Airbnb.

Mapletree Investments is a significant player in the global real-estate market with operations in the US, Australia, Japan, China, India and the UK. The company owns and manages some €30 billion of properties including office, retail residential and industrial property, as well as student accommodation.

Agent Cushman & Wakefield advised Mapletree on the acquisition of the Sorting Office.