Plot measuring 3.2 acres in Blackrock has planning permission for 46 homes 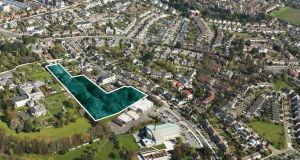 An aerial view of the 3.2 acre residential site at Newtownpark Avenue in Blackrock, Co Dublin.

Agent Savills is guiding a price of €6 million for a prime residential development opportunity in the sought-after south Dublin suburb of Blackrock.

Located on Newtownpark Avenue, the 3.2 acre site is being offered to the market with full planning permission from Dún Laoghaire-Rathdown County Council for 46 new homes, comprising 16 houses and 30 apartments.

The site is accessed from Newtownpark Avenue and is bounded by Guardian Angel’s School, the Daughters of Charity Convent, Cluain Mhuire Community Mental Health Services and large detached housing along Newtownpark Avenue.

Blackrock is located along the Dublin coastline – 9km east of Dublin city centre. The area is home to several highly-regarded schools – including Blackrock College, Willow Park and St Andrew’s College – and businesses such as Zurich Life Assurance, FINCAD Europe and LHK Insurance.

Blackrock village is a bustling commercial hub with a varied selection of cafes, restaurants and boutiques. The Blackrock market operates year-round on Saturdays. In terms of amenities, Blackrock and its surrounding area is well served by facilities for water sports, rugby, tennis, golf and football.

The town is readily accessible by car and bus via the N11 and Rock Road. Blackrock station offers local residents the benefit of a regular Dart service.

Commenting on the Newtownpark Avenue site, John Swarbrigg, director at Savills development, agency and consultancy division said: “Prime residential development opportunities such as this are a rarity in Blackrock, particularly ones that benefit from a full grant of planning permission, so we expect strong interest from parties seeking to develop a high-end residential scheme.”

1 Brown Thomas and Arnotts to cut 150 jobs due to coronavirus
2 47,000 homes need to be built each year to solve housing crisis, report says
3 Jervis shopping centre takes major tenants to court over rent disputes
4 Can Covid free your workplace of bureaucracy?
5 Hairdressing 7% more expensive in July as prices declined across economy
6 Dogpatch Labs and SOSV shortlisted to win NDRC contract
7 Seán FitzPatrick makes fresh bid to secure planning for new Greystones home
8 Digital pollution: ‘We have a pandemic of data and 90% of it is crap’
9 How Argentina and its creditors thrashed out a $65bn deal
10 Shed Distillery in Leitrim to open €3m visitor centre next month
Real news has value SUBSCRIBE