IAG deal isn’t off the table - Minister for Finance 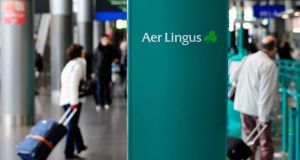 A bid from the Willie Walsh led International Airlines Group for Aer Lingus is not off the table, Minister for Finance Michael Noonan said Wednesday morning (Photograph: Aidan Crawley/Bloomberg)

A bid from the Willie Walsh led International Airlines Group for Aer Lingus is not off the table, Minister for Finance Michael Noonan said Wednesday morning, adding that there is commercial sense for the deal.

Speaking in London on a visit to promote investment opportunities in Ireland, Mr Noonan said that AIB won’t sell its 99 per cent stake in AIB until late 2015 or 2016, and when it does, it won’t sell more than 25 per cent initially.

As Ireland’s cost of funding slid below 1 per cent for the first time, Mr Noonan said that the European Central Bank’s quantitiative easing programme, as well as the Greek deal and the US Federal Reserve’s dovish stance on interest rates hae all helped reduce the cost of funding.