Influential economist says after Greece, Ireland should be among a number of countries to receive ‘significant debt writedown’ 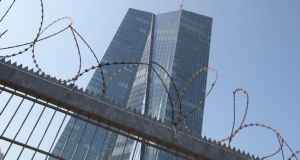 Ireland should go back to the negotiating table for a “significant” debt writedown after the crisis in Greece is resolved, a former International Monetary Fund chief economist has said. Kenneth Rogoff, a Harvard professor, says although the Irish economy was recovering, the country would be “far better off” today if the Government had not taken over so much banking debt.

The influential economist says Ireland should be among a number of countries “that should receive a significant debt writedown”.

“Of course, right now the Irish economy is recovering and it might not be the best time to confuse markets, especially with Greece on the brink,” hesaid, “but eventually the issue should be brought back to the table.”

Mr Rogoff believes massive debt saddled on vulnerable economies in Europe is a major impediment to their growth. Northern Europeans were being “penny wise and pound-foolish” not to agree to broad writedowns for these countries, he says.

“I believe that Ireland would have been far better off today if the Government had not taken over so much of the bank debt, and instead allowed bank creditors to absorb a significant loss. As I understand it, considerable pressure was brought to bear on Ireland to protect the rest of the euro zone against contagion. Perhaps, but then the costs of the bailout should have been shared as well.

“The legacy of this situation should be rectified at some point, even if now might not be the best time.”

Mr Rogoff is professor of public policy and professor of economics at Harvard University. He was chief economist and director of research at the IMF from 2001 to 2003. – (PA)